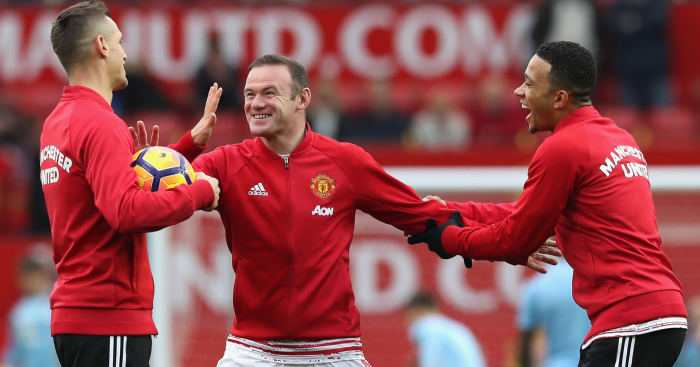 Ian Wright reckons Man Utd would struggle to find anyone who would pay anything for Alexis Sanchez at the moment. It’s ludicrous, of course, especially when you consider how recently United have generally recouped a large slice of the money they invested in failed signings. Who will go first? Sanchez or Pogba?

1) Angel Di Maria
Bought: £59.7m from Real Madrid in 2014
Sold: £44m to PSG in 2015
Net cost: £15.7m
The Argentina star was a British record signing when he arrived from Real Madrid and, despite an encouraging start, he slipped out the back door only a year later as he fled for PSG. The second half of his debut year at Old Trafford was every bit as miserable as Sanchez’s first and one of Ed Woodward’s most astute pieces of business was ensuring the club took only a £15million hit on the pea-hearted winger.

2) Dimitar Berbatov
Bought: £30.75m from Tottenham in 2008
Sold: Undisclosed – thought to be around £5m – to Fulham in 2012
Net cost: £25.75m
Debate still rages about whether Berbatov was a hit. His fans point to 48 Premier League goals in 108 appearances as evidence that he was worth the outlay and Sir Alex Ferguson insisted: “I don’t think Dimitar was a failure here.” But the manager still left him out of his squad for the 2011 Champions League final after Javier Hernandez established himself above Berbatov in the pecking order. The end for the Bulgarian came when he was sold to Fulham for around £5million, which was probably fair business for a 31-year-old back-up forward.

3) Rio Ferdinand
Bought: £30m from Leeds in 2002
Sold: Released in May 2014
Net cost: £30m
The England defender was another British record signing but Ferdinand proved to be a bargain during a 12-year career at Old Trafford where he won 17 trophies.

4) Juan Veron
Bought: £28.1m from Lazio in July 2001
Sold: £14m to Chelsea in Aug 2004
Net cost: £14.1m
“He is a f*cking great player. And yous are f*cking idiots.” Ferguson pulled no punches in his defence of Veron after an erratic first year at Old Trafford and few would argue that, technically, the Argentina midfielder was not indeed a ‘a f*cking great player’. But the ex-Lazio star struggled with the pace and intensity of English football and United cut their losses after three years when Chelsea offered them half their money back. Veron fared even worse at Stamford Bridge.

5) Henrikh Mkhitaryan
Bought: £26.3m from Borussia Dortmund in July 2016
Sold: Straight swap for Alexis Sanchez with Arsenal in January 2018
Net profit: £8.7m
Mkhitaryan showed glimpses but the Armenia midfielder failed to convince Jose Mourinho that he was worth a first-team place after a series of inconsistent performances when he was selected. His exit was a rare example in the modern game of a straight swap deal. United and Arsenal each valued Mkhitaryan and Sanchez at around £35million so the exchange made perfect sense. Arsenal have probably had marginally the better end of the deal.

6) Wayne Rooney
Bought: £25.6m from Everton in August 2004
Sold: Free to Everton in July 2017
Net cost: £25.6m
In a 13-year career at Old Trafford, Rooney became the club’s record goalscorer while winning five Premier League titles and the Champions League. By the time it came to leave, the priority for United was shifting the captain’s wages off the books. The then-31-year-old had two years remaining on a £300,000-a-week deal so the Red Devils waived a transfer fee in order to facilitate a return to his boyhood club.

7) Memphis Depay
Bought: £25million from PSV in June 2015
Sold: £16m, could rise to £21.7m, to Lyon in January 2017
Net cost: £3.2m
Depay was signed to replace Di Maria and unfortunately for United, it turned out to be like-for-like, with the Dutchman failing to impress in a series of limp performances. Mourinho was very complimentary of the winger’s attitude upon his exit, with United inserting a buy-back clause in the deal, but the fact remains they were still happy to sell only a season and a half on from signing him.

8) Morgan Schneiderlin
Bought: £25m from Southampton in July 2015
Sold: £22m rising to £24m to Everton in January 2017
Net cost: £1m
One half of the Sch-midfield recruited by Louis van Gaal, the France midfielder struggled to impress at Old Trafford, with both him and Bastian Schweinsteiger shipped out before the end of their second term at the club. Somehow, United almost got their money back despite Schneiderlin doing little to justify holding his value.

9) Robin van Persie
Bought: £24m from Arsenal, August 2012
Sold: £3.84 m to Fenerbahçe, July 2015
Net cost: £20.16m
Glazernomics had taken a firm grip of the club long before 2012 but United made an exception when they forked out for 29-year-old Van Persie. It was a masterstroke. The Holland striker was brilliant for Ferguson in his final year at the club, helping United claw back the title from Man City while winning the Golden Boot. Then Fergie left and it all went pear-shaped for everyone. Van Persie – nor anyone else aside from David De Gea – could reproduce similar form for David Moyes or Van Gaal. United took a hit of around £20million just before the striker’s 32nd birthday but Van Persie’s achievements during his first year made it money well spent.

10) Ruud van Nistelrooy
Bought: £19m from PSV in April 2000
Sold: £10.3m to Real Madrid in July 2006
Net cost: £8.7m
Another Dutch centre-forward who became an instant hero at Old Trafford. Van Nistelrooy netted 36 times in his first season before following that with 44 goals to inspire United to the Premier League title in 2003. He broke the 30-goal barrier in his third season before injury ravaged his 2004/05 campaign but he still managed to eclipse Denis Law’s European goalscoring record. His exit was preceded by reports of fall-outs with Cristiano Ronaldo and Ferguson eventually showed him the door citing “the spirit of the club”. Van Nistelrooy personally apologised to Ferguson for his behaviour prior to his departure and it shouldn’t cloud the fact that he was sodding brilliant for United.