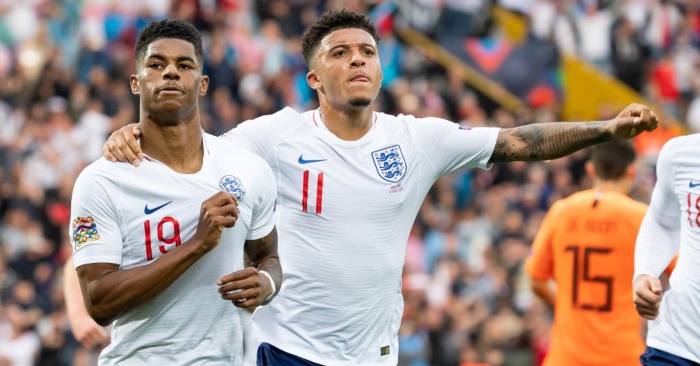 Jadon Sancho is reportedly ‘excited’ about his move to Manchester United, with the deal to take the winger to Old Trafford gathering momentum.

The Borussia Dortmund star could be a United player by the end of the week after an 18-month long ordeal to secure his transfer.

Ed Woodward is said to currently be tying up the loose ends of the deal.

He is expected to be given a five-year contact, and the Independent claim the 20-year-old is ‘excited’ at the prospect of joining United’s forward line.

Both Anthony Martial and Marcus Rashford have found the net on 22 occasions this season and with the emergence of Mason Greenwood, who has struck 17 times, United already have one of the most feared forward trios in the Premier League.

With Sancho all but secured, United will have the firepower to cause any side problems next season.

And Phil Neville believes the club are right to be prioritising Sancho over Aston Villa playmaker Jack Grealish.

“People are talking about Grealish, but now with [Bruno] Fernandes in there, do we need another number 10?” Neville asked.

“I think the right-hand-side is the biggest area where we need to improve. An out-and-out winger.

“I think the right-hand-side is the one big hole in the squad.

“United haven’t really had anyone since Antonio Valencia, really.

“Sancho can play out there and play really well.

“You’d say that’s someone who will fit the profile.

“You think Rashford and Greenwood, both British players, you think of Fernandes, he’s young and hungry, Sancho fits that.”