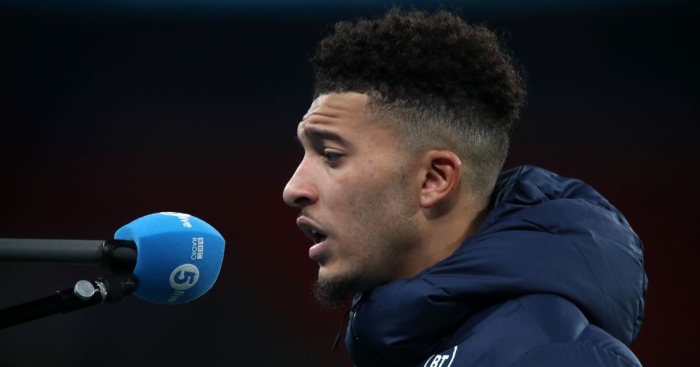 Jadon Sancho has insisted that his recent “dip” in form is not because of summer links of a move to Man Utd.

For the past two seasons, Sancho has been one of the most consistent attackers in Europe with Borrusia Dortmund.

During the 2018/19 season, he got 12 goals and 14 assists from his 32 Bundesliga outings. He stepped this up the season after, as he was involved in 33 goals from his 34 league outings.

In that time, the 20-year-old has also established himself in England’s senior squad. Since making his debut in 2018, he has 16 caps and he has scored three times.

He was heavily linked with a move to Manchester United in the summer. But with Dortmund unwilling to accept an offer less than £108m, a deal could not be agreed.

The window closed with Sancho still a Dortmund player. He has not been his usual prolific self so far this season. He is yet to score from his first six Bundesliga outings, but he does have two assists to his name.

Sancho told ITV Sport that his recent “dip” in form is not down to rumours of a move to Manchester United:

“Nah, I don’t think so. I feel like every player has a little dip in their career, and I feel I’m going through that at the moment. It is just how I’m bouncing back and I am just happy to have managers who have faith in and keep sight of me.”

“I’m just happy to be starting for England. Every time I play I just try to do my best and luckily today I got the goal. I’m happy to help the team again.

“I expect a lot from myself personally. When I play I try to assist and score and help the team. For a couple of games, I haven’t been assisting or scoring but I knew I had the chance to do that.”