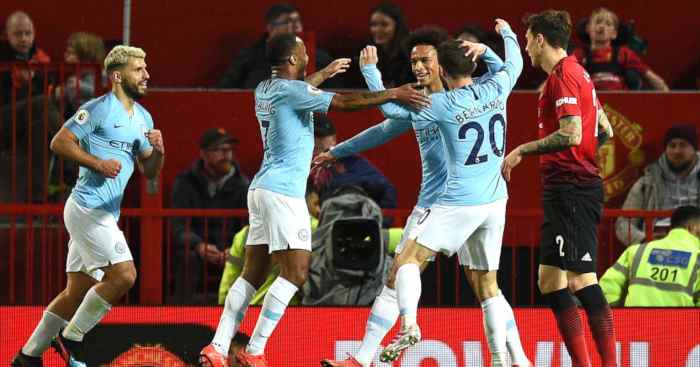 Leroy Sane believes Manchester City’s derby victory will give them huge confidence as they look to wrap up the Premier League title.

City are now clear favourites to win the top flight after moving back to the summit with a crucial 2-0 victory over Manchester United at Old Trafford on Thursday.

The champions, who have won their last 11 league games, are a point ahead of Liverpool with three matches remaining for both clubs.

The derby was seen as the toughest hurdle left facing City as they bid to become the first side to retain the title in a decade.

Sane, who came off the bench to score City’s second goal, said: “If you have this late a derby and you win this big game, it gives you a lot of confidence, especially when you have just three games left to play. Every one of us wants to do the back to back.

“We’re really happy about this win because it is the derby – a special game – and also really important for the Premier League.”

Sane recognises the job is far from done, however. With such a slender lead City can ill afford any slip-ups in their remaining fixtures, starting with Sunday’s trip to Burnley.

The German winger said: “Like we did all season, (we must) stay focused. Now we just have to rest and then focus again for Burnley. The last three games won’t be easy at all.”

City had to draw on their champion qualities to prevail on a tense night at Old Trafford. United, stung by their poor recent form and Sunday’s embarrassing 4-0 defeat at Everton, started at a high tempo and created a number of chances.

Pep Guardiola’s men had to bide their time but their superiority showed as United tired in the second half. Bernardo Silva made the breakthrough after 54 minutes and Sane doubled the lead following a quick counter-attack 12 minutes later.

City then comfortably saw out the game, the only downside being an injury to Fernandinho. The Brazilian was withdrawn as a precaution after hurting his knee blocking a shot from Paul Pogba.

He will have a scan and be assessed ahead of the next game at Turf Moor.

Sane, who came on for Fernandinho, said: “When I came into this game I tried to help the team and push them to score the first goal and the second goal.

“The first from Bernardo gave us another push, more confidence and we just tried to win the game after this. It happened really good.”