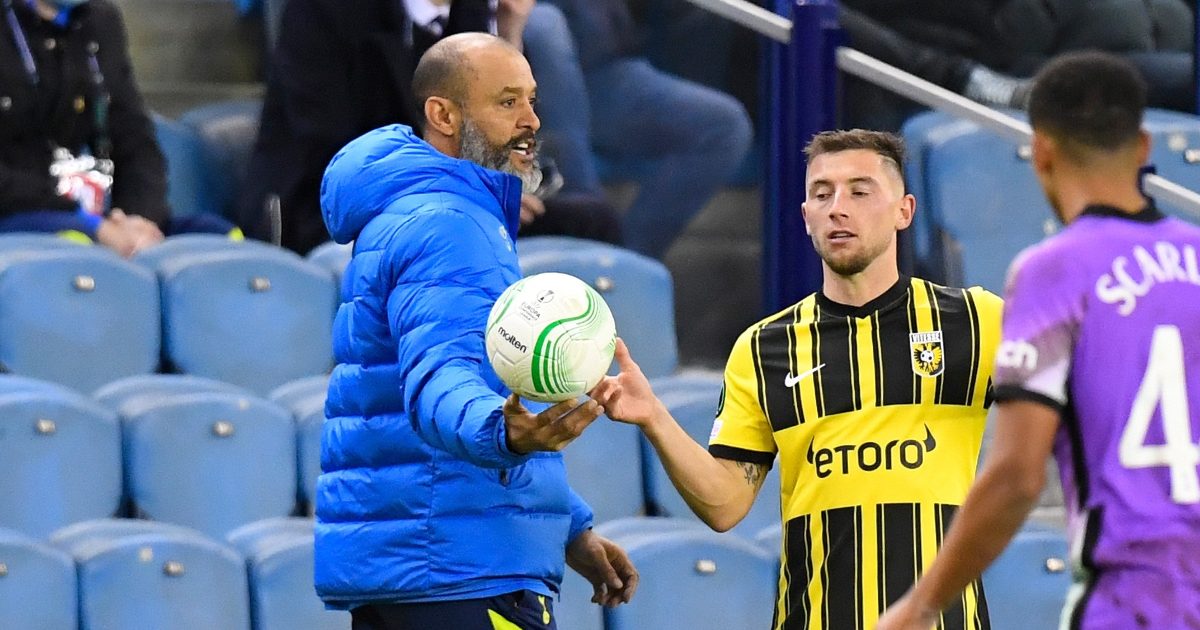 Nuno Espirito Santo is happy to give Tottenham Hotspur’s fringe players a “chance” to play in the Europa Conference League as it provides “tough moments”.

Spurs were without Harry Kane, Son Heung-Min, Cristian Romero and Hugo Lloris against Vitesse as they did not travel.

Santo named a makeshift team on Thursday night as he made eleven changes from their 3-2 victory over Newcastle United on Sunday.

Little sympathy for p*ss-poor Spurs but plenty for Scarlett

Tottenham were far from their best and they were punished for this in the second half. Maximilian Wittek scored the winner for Vitesse with just over ten minutes to go.

This result drops Spurs down to third in their Europa Conference League group. As reported by BBC Sport, Santo said after the game that his side “could [have done] more” in attacking areas against Vitesse:

“It was a tough match against a good team. There were some moments where we did well but we learned some details.

“In attack we could do more and we should finish the actions. We had good situations to be better.

“The goal came from a foul which I think can be discussed, but there should be more cover at the edge of the box.

“The Europa Conference League is like this, there are always tough moments. We have got two home games which I truly believe can help us solve the group.

“We have players who work hard and deserves matches. The Conference League is a chance for them to get minutes.”

Ben Davies said after the defeat that Spurs did not give “the best account” of themselves on Thursday night:

“It was a tough game. I don’t think we gave the best account of ourselves. I don’t think the pitch helped, we didn’t have any decisions going our way.

“The boys aren’t playing all the time and we wanted to give it our best but it was tough to do that. They pressed us really well. I don’t think there are any doubts about our commitment.

“It was a very tough game for us, a tough atmosphere to play in and we didn’t give the best account of ourselves.

“The effort was there but it was a shame the way it ended. It was tough to get going. We lost a lot of second balls. We were under the cosh a lot.

“This is football, everyone knows how many players you need to compete on all fronts. Most of us needed minutes and it was a good opportunity to get them. The result wasn’t what we wanted, but we have to go again.”