Home All The News Sarri ‘baffles’ Chelsea board over Hazard decision 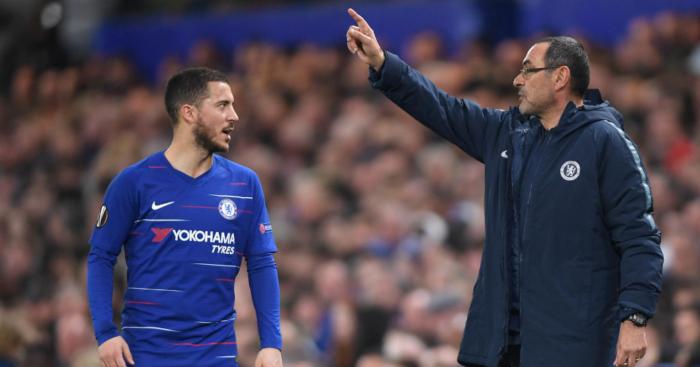 Maurizio Sarri has stunned Chelsea’s hierarchy by deciding not to start Eden Hazard in the Europa League on Thursday evening, according to reports.

Hazard has been in brilliant form for the Blues this season with 16 goals and 13 assists in 35 Premier League appearances.

That form, as well as Zinedine Zidane’s return, has led to renewed speculation that Real Madrid will sign him when the transfer window reopens in the summer.

Chelsea currently occupy the all-important fourth position in the Premier League table as they try to qualify for next season’s Champions League, while they can also qualify by winning the Europa League.

However, Sarri decided to rest Hazard for their 1-1 draw in Frankfurt on Thursday night that gave them a great chance to progress with the second leg to be played at Stamford Bridge.

And The Times claim that Chelsea ‘executives were baffled and unimpressed by Maurizio Sarri’s decision not to start with Eden Hazard’ against the Bundesliga side.

Hazard did come off the bench in the 61st-minute at the Commerz-Bank Arena and Sarri’s team selection ‘raised eyebrows’ in the Chelsea boardroom.

The report adds that the ‘Chelsea’s hierarchy do not meddle in team selection and did not ask Sarri to explain himself’ and that the Italian coach’s future ‘will be decided in talks between Roman Abramovich and Marina Granovskaia at the end of the season.’