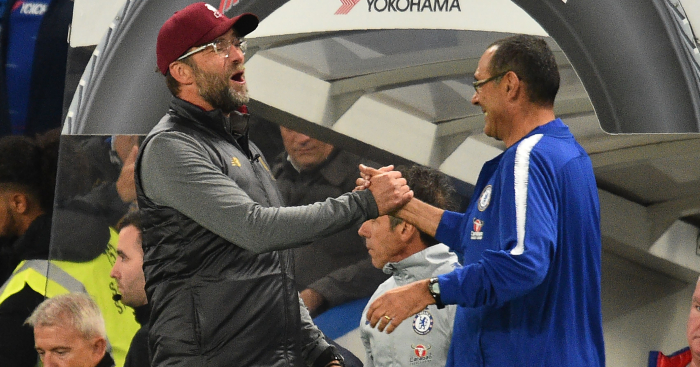 Maurizio Sarri says his Chelsea side are closer to Liverpool than he previously thought, but still only contenders for the Premier League’s top four and not the title.

Eden Hazard, the match-winner in Wednesday’s Carabao Cup win at Anfield, had looked like inflicting the Reds’ first loss of the season before Sturridge’s strike.

Sarri, though, maintains his Blues are not likely to challenge holders Manchester City or Liverpool for the title.

The Chelsea head coach said: “I think City and Liverpool are a step forward of us.

“But I think also we are more close than I thought one week ago.

“I think we can fight for the Champions League.

“There are six, seven top level teams, top in Europe, not only in England. It’s not easy to get in the Champions League.

Hazard has been in sparkling form, scoring six league goals this season and has been set a 40-goal target by Sarri.

The Blues boss insists his side are not over-reliant on the Belgium playmaker, despite the lack of a goal threat from strikers Olivier Giroud and Alvaro Morata.

“I am not really worried about it. Because we have a winger that is able to score so frequently,” Sarri said.

“I think at the end of the season we can have four, five players over 10 goals. And so it’s not only Hazard.

“He’s trying to do it. I’m really very happy with the defensive performance of Hazard today, especially in the second half.”