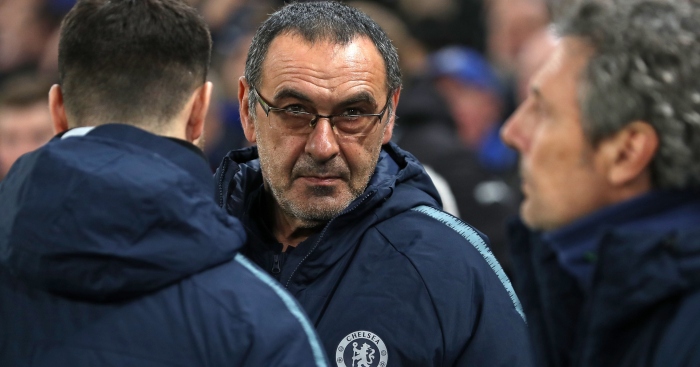 Chelsea will take on New England Revolution in Foxboro on May 15 as part of the club’s Say No To Antisemitism campaign.

The America clash comes just three days after Sunday’s final Premier League fixture at Leicester, with the Europa League final against Arsenal taking place on May 29 in Baku.

Head coach Sarri hailed Chelsea’s initiative and the motivations behind the New England fixture, but conceded it could dent the build-up to their first European final since 2013.

“A problem? We go there for a good reason I think, so as a man I am very happy to go there,” said Sarri.

“As a coach, of course, I am a little bit worried because I know very well that the team now needs rest.

“So it is not the best way to prepare for the final, I think.”

Asked if the America trip puts Chelsea at a disadvantage compared to Arsenal, Sarri continued: “I don’t know, Arsenal is not my problem.

“I have to look to my players, so I know very well that my players need to rest, and after four or five days they need to work for three or four days and then they need to prepare for the match. The match will be interesting and difficult.”

Sarri expects to hand his squad several days’ break after America, in a bid to refresh minds perhaps more than bodies.

“I want to speak to the physical staff, to the doctor and then we need to prepare the programme,” said Sarri.

“I think that they need three or four days completely in rest.

“I am not worried about the physical side, I think it is more difficult to recover mentally.

“Because in a match like this one you spend, usually, a lot of energy and then of course you have to go down and then it is not easy to go up again.”

Eden Hazard continues to close in on a move to Real Madrid this summer, though Chelsea are holding out for a £100million transfer fee.

Sarri admitted he remains unsure if a top-four finish and a potential Europa League title would be enough to convince Hazard to stay Chelsea however.

Asked if Chelsea’s season could keep the Belgium playmaker at Stamford Bridge beyond the summer, Sarri said: “I don’t know, I don’t know. If Hazard is thinking that the history here is finished, then in his mind it is finished.

“I can try to speak to him but it is not easy. It’s not easy because of course I want Hazard, but I want Hazard with a very high level of motivation.