David Luiz has insisted Kepa's refusal to be subbed was not indicative of Sarri losing the respect of his players. 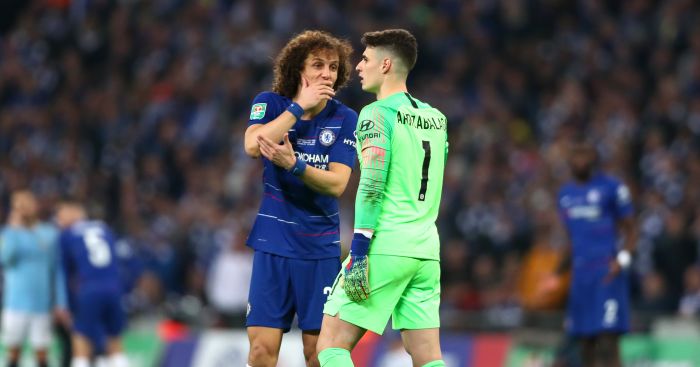 David Luiz has insisted Kepa Arrizabalaga’s refusal to be substituted was not indicative of Maurizio Sarri losing the respect of his Chelsea players.

Sarri‘s position is precarious after a run of poor results, but the 60-year-old Italian showed some tactical flexibility and his team put in a valiant performance in Sunday’s Carabao Cup final with Manchester City, who had beaten the Blues 6-0 just two weeks earlier.

City retained the trophy with a 4-3 penalty shootout win at Wembley, but the match was overshadowed when Kepa declined to go off, sparking an angry response from Sarri.

Both parties later played down a misunderstanding and Luiz was adamant the players are on Sarri’s side.

“The coach has the power over the group. He has our respect,” Luiz said.

“That’s why we did a great game against the best team in Europe at the moment.

“Apart from that, it was a misunderstanding and we all want to do what is best for Chelsea.”

“It was not a good picture for Chelsea,” Ballack told talkSPORT.

“The board has to say something because it is really, really important that the players respect the coach and respect each other. Something shouldn’t happen like that.”

Luiz was the closest player to Kepa as Sarri readied Willy Caballero to come in the final minute of extra-time, with the fourth official’s board even indicating Kepa was to come off. Caballero saved three penalties in City’s 2016 League Cup win over Liverpool.

Rules dictate a player has the right to refuse to be replaced and referee Jon Moss took time to clarify the incident before Kepa stayed on for the shootout.

He saved from Leroy Sane, but dived over Sergio Aguero’s effort and Jorginho had a penalty saved and Luiz hit the post as Sarri’s wait for a first trophy of his career goes on.

Luiz added: “It is never easy for us to listen from afar. I didn’t know if the coach wanted to make the change because it was his decision or because he (Kepa) had already been on the floor twice.

“Kepa was saying ‘no, I’m good, I can stay on the pitch’, but from far you can’t understand.

“I’m sure if Kepa knew the coach wished to change him because it was his decision, he would have come off because he is a great professional, he is a great boy and would respect that.”