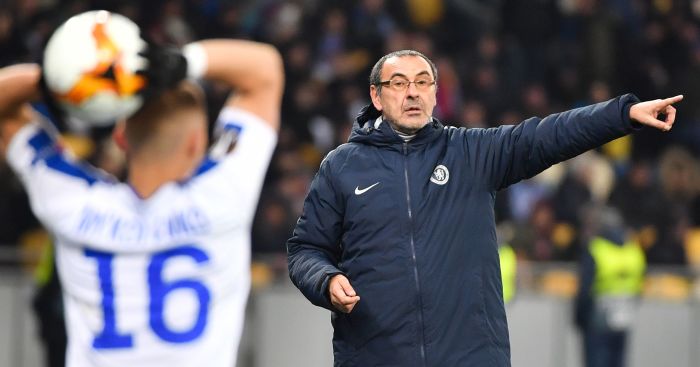 Chelsea head coach Maurizio Sarri wants to dodge a two-legged Europa League tie with Napoli because of his positive relationship with his former club.

Sarri faces the possibility of being paired with the team he left last summer when the quarter-final draw takes place on Friday.

While that would present a mouth-watering prospect for many, the 60-year-old is keen to avoid what he believes would be a tough return to the Stadio San Paolo.

Sarri, instead, hopes to delay a potential reunion until the May 29 final in Baku.

“I prefer to face them in the final. First of all, because it means we are in the final and I am happy with that,” said Sarri.

“And second, it means that Naples are in the final, and I am happy. You know very well my relationship with the city, with the people.

“So, for me, it will be very difficult to play against them in Naples.”

Chelsea progressed to the last eight of the competition with a thumping 8-0 aggregate win over Dynamo Kiev, while Serie A club Napoli scraped past Red Bull Salzburg.

Olivier Giroud’s hat-trick inspired the Blues to a 5-0 second-leg success in the Ukrainian capital on Thursday evening.

Callum Hudson-Odoi celebrated his first England Under-21 call-up with the final goal, while Marcos Alonso was also on target.

Sarri insists France World Cup winner Giroud – who is now this season’s Europa League top-scorer with nine goals – remains a key member of his squad, despite his lack of Premier League action.

“Every time he has been on the pitch, he was able to play really very well,” said Sarri.