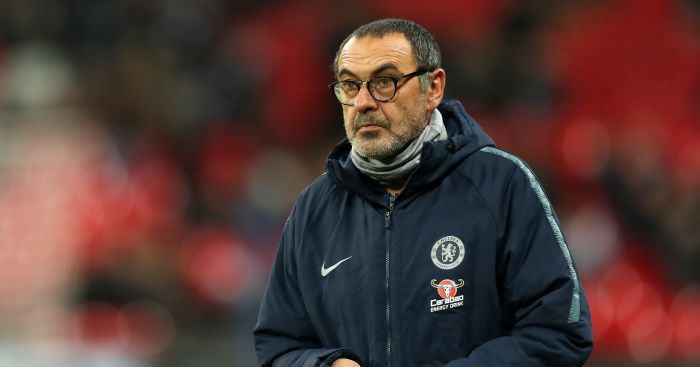 Maurizio Sarri admitted he was forced to throw Eden Hazard into action in a bid to rescue the Europa League quarter-final first leg at Slavia Prague.

Chelsea head coach Sarri concedes he did not want to use Hazard at the Sinobo Stadium, but the Blues’ lacklustre showing forced his hand in the second-half.

Marcos Alonso’s late header saved Chelsea’s night, with the Blues now expected to complete the job in next week’s second leg and reach the semi-finals.

Sarri’s men face Liverpool at Anfield on Sunday in a key battle in their bid for a top-four Premier League finish, with Hazard doubtless now not as fresh as originally planned.

Asked if he had always planned to bring Hazard off the bench, Sarri replied: “No, at the beginning of the match I wanted him on the bench because I thought that, probably, the match was really very difficult.

Chelsea rested Callum Hudson-Odoi in Prague, with Sarri unsure whether he will start at Liverpool, who are reportedly interested in the winger.

Asked if Hudson-Odoi will start, Sarri said: “Oh, I don’t know. But in my opinion he needed to rest. And so, in this match, he was out.

“But of course he is in my mind for the next match, but I have to see the last two training (sessions).”