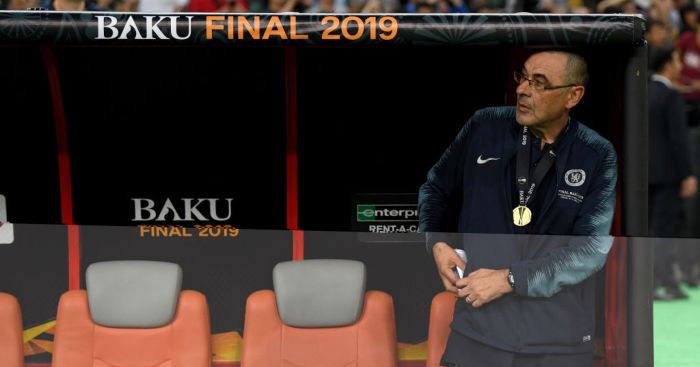 Maurizio Sarri felt the time was right to return to Italy after leaving Chelsea following just one season to take charge of Serie A champions Juventus.

The Blues agreed a compensation package with the Italian club, understood to be in excess of £5million, for Sarri, 60, who signed a three-year deal with Chelsea when appointed last summer.

Sarri revealed the opportunity to move back to his homeland was one of the telling factors behind the move.

“The Premier League was a great experience, but in the latter half (of the season), I felt professional and personal needs to return to Italy,” Sarri said at a press conference in Turin on Thursday broadcast by the Serie A club.

Despite some negative reaction from sections of the Chelsea fan base not convinced by his style of play, Sarri guided Chelsea to the Carabao Cup final, where they were beaten on penalties by Manchester City, and then finished third in the Premier League.

The Italian ended the campaign on a high, with victory over Arsenal in the Europa League final in Baku.

Sarri, whose return to Italy will see him be nearer his family, including his elderly parents, said: “I feel that I have respected everyone and I gave my all.

“Juve are the best Italian club right now and offered me a chance to return to Italy. It’s the crowning achievement of a long career, that for 80 per cent of it was extremely tough.”

Sarri faces another tough challenge ahead in Turin as he attempts to build on the work of Massimiliano Allegri, who left at the end of the season with Juventus having been crowned Serie A champions for the eighth successive time.

The former Napoli boss, though, is ready to get to work following the efforts made to hire him.

“I have never seen so much determination on the part of a club to hire a coach. They had a great attitude which convinced me, they were very strong feelings,” he said.

Sarri added: “I expect to wake up every morning studying how to win games. Winning continuously is always hard and Juventus have an obligation to always win, but with the awareness of the difficulty.

“For three years (at Napoli) I would wake up and think about how to defeat Juventus, because they were a winning team.

“I gave 110 per cent, but we still couldn’t do it. It was an experience and I will now give everything for this club.”

Sarri accepts he will have to win over some Juve fans, given his association with rivals Napoli.

“I arrive with scepticism, just as I did with all my other clubs. I understand that, but I know only one way to change that and that is to win and convince while entertaining and getting results,” he said.

Juventus sporting director Fabio Paratici had earlier thanked Chelsea for the way the negotiations over Sarri had been conducted.

“We had clear ideas from the start, but you have to show respect for a coach under contract and two big clubs,” he told a press conference.

“I thank Chelsea for their actions, as Marina Granovskaia confirmed herself as one of the best directors out there.”

Paratici, though, stressed Juventus fully expect Sarri to deliver results, adding: “We are here to win.”

Sarri believes he will emerge stronger from his experiences in England and under the media spotlight.

He said: “The world of the English media is well known to everybody, there are great newspapers and also some tabloids. This is something which certainly strengthens you a lot.

“What I was a little disappointed with was the fact that here in Italy, what the tabloids wrote was mainly reported compared to the articles of the other newspapers.

“But of course then all of the criticism and the attacks, the pressure that you have to undergo will somehow strengthen you.”