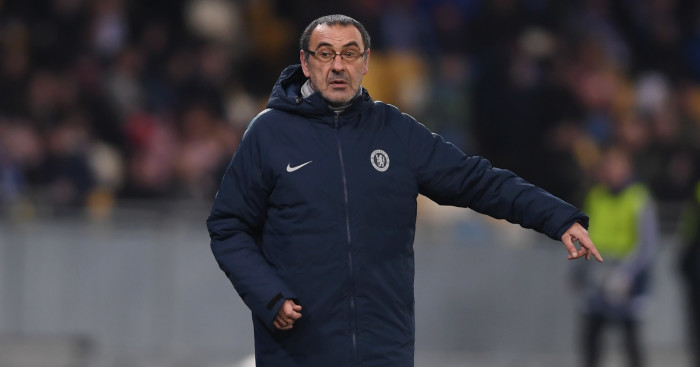 Maurizio Sarri was delighted with the way Chelsea went about their business across the whole 90 minutes as they demolished Dynamo Kiev to reach the Europa League quarter-finals.

Chelsea cruised to a 5-0 win which saw them advance 8-0 on aggregate, with Olivier Giroud stealing the headlines with his perfect hat-trick.

Sarri was impressed with his side’s attitude right from the first whistle.

“We started very well. We wanted to start in this way and for the opponents it was a difficult situation,” he said. “We played a very very good first half and in the second we managed the second. It was very good for 90 minutes”

The Italian was unsurprisingly delighted with Giroud’s performance.

“It was very good. In the last period, every time he has been on the pitch he has been very good. He scored nine goals in nine games in this competition. I am really very happy with him.”

“We had to play on this pitch, so we played. I remember this pitch a couple of years ago and it was very good.”

Sarri’s former club Napoli also qualified after beating RB Salzburg 4-3 on aggregate, and the coach admitted he would love the two sides to meet in the competition – but not just yet…