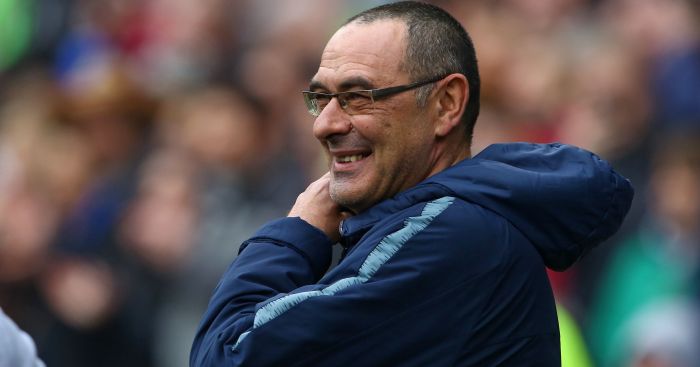 Manuel Pellegrini believes Chelsea counterpart Maurizio Sarri is right to stick with his philosophy despite the scepticism at Stamford Bridge.

The Italian has struggled to implement his famed ‘Sarri-ball’ system with fans growing frustrated at players playing out of position.

Yet recent wins over Cardiff and Brighton have ensured Chelsea remain firmly in the race for a top-four finish in Sarri’s first season in charge.

Pellegrini’s first four matches as West Ham manager ended in defeat, prompting questions about his attacking style, yet the Chilean stuck with his principles and eventually turned their results around.

He said: “It is more hard when you don’t obtain the results that you want. Players will trust it if they see that by playing that way you win.

“As a manager, you must be used to that pressure, but you must continue doing what you believe is the best way to win a game, before the game and during the game.

“After that, personally, when I don’t win the game I make a self-criticism about the mistakes.

“If you are always feeling you must change something because the pressure will be too high? I don’t think you can be a top manager.

“Maurizio is just starting his first season here in England. It is not easy to come to the Premier League, you must know a lot of things.

“He is maybe part of the reason they were playing very well and now that they have a couple of bad results you cannot not trust in all that he is doing.

“He is a very good manager. He demonstrated that at another team so I hope that he will finish this season in a good position for Chelsea.

“Chelsea in this moment are close to the spot of Champions League for next season. Maybe they are not involved in the title but they continue fighting for the Europa League and they reached the final of the League Cup.

“So when we finish the season if Chelsea are in a spot of the Champions League I think that will be a good season for Chelsea and Maurizio Sarri.”