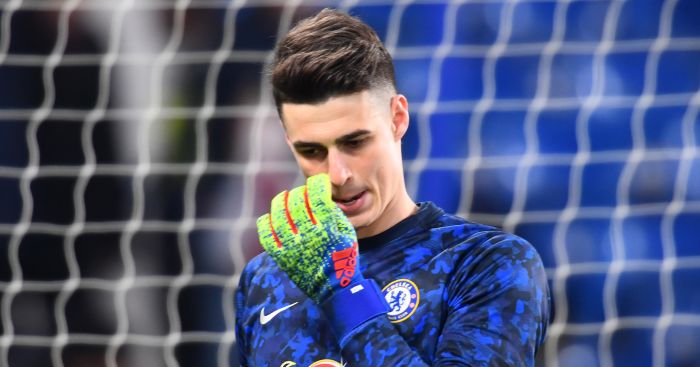 Chelsea’s 4-3 shootout loss to Manchester City in Sunday’s Carabao Cup final was overshadowed by Kepa’s refusal to be substituted with penalties looming.

Initially downplayed as a “misunderstanding”, the world’s most expensive goalkeeper was subsequently fined one week’s wages and dropped to the bench as Willy Caballero took his place in a defeat of Spurs secured by Pedro’s strike and a Kieran Trippier own goal.

“I think it was the right decision,” Sarri said.

“Kepa made a big mistake, he paid with the club and then he had to pay with the team.”

Sarri insisted Kepa, a £71.6million buy from Athletic Bilbao last summer, remains his first choice, but he will share goalkeeping duties with Willy Caballero in the next two games, with Dynamo Kiev following the Craven Cottage trip.

Sarri says Kepa discovered his demotion in the team meeting, while Caballero was untested as Tottenham’s troubles continued and Chelsea’s top-four hopes were reignited.

Spurs are third, seven points ahead of sixth-placed Chelsea, who have a game in hand, and will be looking over their shoulders, Sarri says.

He added: “I think maybe with this result we could involve Tottenham in this fight. The gap is very large, seven points, but we have one match (in hand).”

Sarri’s position has been precarious and he does not expect the Spurs win to end questions over his future.

“I spoke with the club two, three times in the last days. The problem wasn’t so big,” Sarri said.

“It’s not a big problem for me. In this job you are under pressure every week, if you’re lucky every six months. It’s normal.

“If you lose two matches, three matches in a row you’re under pressure. I think it’s normal for every coach, maybe something more in Chelsea.”