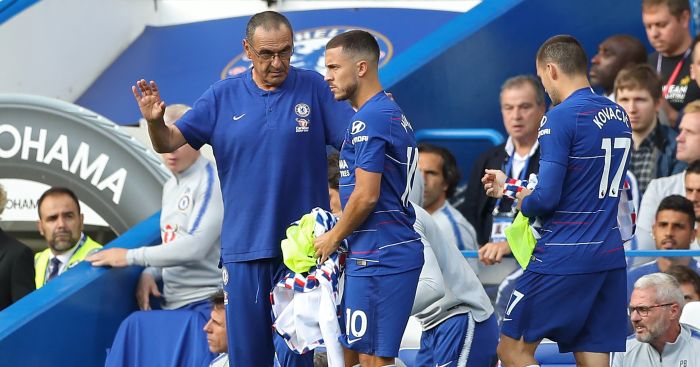 Maurizio Sarri hopes that Eden Hazard is the next Chelsea player to commit their future to the club after N’Golo Kante signed a new five-year deal on Friday morning.

The France international put to pen to paper on a new contract reportedly worth £290,000-a-week, while it is understood that Chelsea are willing to offer in excess of that to get Hazard to sign.

There have been rumours over the last few years that the Belgium playmaker could swap Stamford Bridge for Real Madrid in the future.

However, Sarri is very clear that he wants Hazard to sign up as soon as possible.

Get up to £100 in free bets when you are a new customer with Betfair, just in time for this weekend’s Premier League action.

“He is very important player for us in the defensive phase and is improving in offensive movements. Now he has to improve in the last 20-25 metres, he can score more.

“N’Golo, for us, is not just an important player. He’s a ‘determining’ player for us. So I’m really happy with the new contract. Clearly very pleased for him. And it’s a very important news.

“I know that David told something about him, that he doesn’t want to pay the bill in the restaurant. So he has a flaw like everybody. But I think he is a really professional player, very professional on the pitch and off the pitch.”