Home F365 Features Save your crocodile tears for Macclesfield Town…

Macclesfield Town's demise is on all of us. And it will happen again and again. 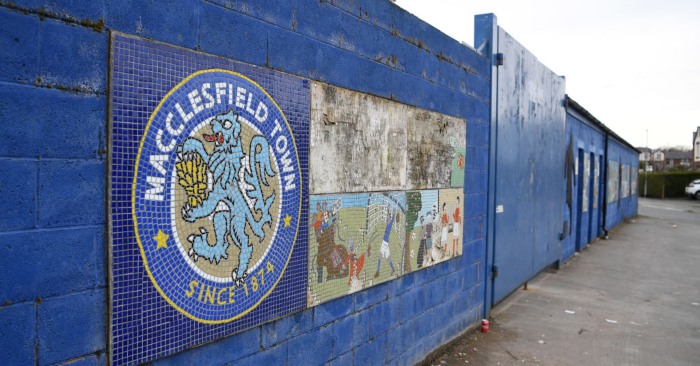 Winding-up hearings are never particularly personal affairs but this one was done with ultra-clinical efficiency in a virtual meeting that saw 146 year-old Macclesfield Town done and dusted in minutes.

But the outpouring of anger on social media was ultimately Aero-light and will disappear off the tongue like the chocolate bar. ‘This must never happen again’ could have been written by Stock, Aitken and Waterman and been covered by Seal, the Scissor Sisters, the Saturdays and the Snuts considering the number of times it’s been done to death in English football; and then happened again.

It’s not as if we didn’t see it coming in the most slow-moving climax since Prince started singing about 1999 in 1982; it was just a case of which club went to the wall first in this free-market modern football f**k-fest. Sadly, it was the Silkmen of Macclesfield – with the most loyal, unassuming fans – who have copped it.

Back in 1992 Aldershot went under, wound up too in the High Court, and there were plenty of ideas of about what should be done to prevent a repeat at other clubs. A fella from Rugby called Brian Lomax came up with the most sensible solution as his club Northampton Town hit the skids themselves. His line was that fans should be partners in the running of clubs and set up the first supporters’ trust at the Cobblers, making the East Midlands club the first modern fan-owned team.

But 1992 was the year the Premier League burst into life and swept away much of the sensible work of having fan-ownership as a counter-weight to the problematic private ownership model. ‘Let money run free and everything will be okay’ seemed to be the back of a fag packet summary, doomed to disaster.

Lomax headed up Supporters Direct, the organisation tasked with bringing fan-ownership into the mainstream as part of the ‘Football Taskforce’ as Labour swept to power in 1997. Almost straight away, the Premier League, Football Association and the Football League rejected calls for an independent football regulator – Offoot – and opposed the mandatory introduction of fans’ representatives on club boards, measures that would have put the game on a stable footing.

Few have done enough to hold the feet of the so-called ‘guardians of the game’ to the fire since.

Straight away came the line that Macclesfield have been simply living beyond their means, ignoring the culture of profligacy that saw only 12 clubs out of 48 break even in League One and Two pre-Covid 19 pandemic. All too few asked questions why Iraqi club owner Amar Alkadhi was interested in modest Macclesfield in the first place.

I’ll be talking to @chriswarburton_ on @bbc5live at 10:45pm about Macclesfield Town’s winding up & the unsustainable finances in lower league football. Only 12 clubs out of 48 broke even in L1 and L2…& this was pre-Covid19 pic.twitter.com/oo2wOnVdqe

But it’s not surprising in a team sport that has grown to be the most selfish in the country. One of the main reasons Macclesfield resonates so much now is that people are fearful their club could be next. Southend United gained a reprieve from their own-winding up over a similar tax bill to Macclesfield. Who knows how many more teeter on the brink?

But save us the crocodile tears; this one is on all of us. If you’re a member of one of the football authorities who has not done enough to protect clubs, fans and communities in times of calm, it’s on you.

If you’re a well-meaning journalist or member of the football profession that has got caught up with the match-to match grind and put little into demanding improvements to the game’s governance, it’s on you.

If you’re a supporter that sniggers when a club goes under or jeered that fan-ownership “will never work” when it’s functioning beautifully – against the odds at Exeter, Wimbledon and Motherwell – it’s on you too. Macclesfield is on all of us and there will be more to come.

Meanwhile, one of the seemingly better owners, Mark Palios of Tranmere Rovers, tweets, impassioned about a lack of fans’ influence and the need for a regulator for the sport, ideas that were knocking around in the 90s, signifying just how long has passed with all too little actually achieved.

In 2008 Andy Burnham, key in setting up the original Labour Taskforce, said that football needed to “reassess its relationship with money”. No shit.