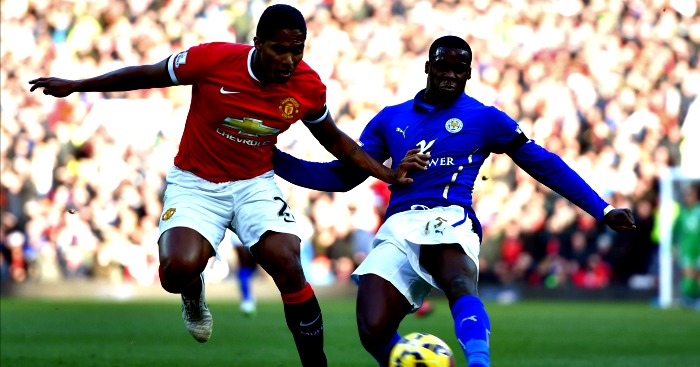 Leicester midfielder Jeff Schlupp admits Manchester United shaped him as he prepares to stun football and win the title at Old Trafford.

The Foxes will take the Barclays Premier League crown with victory at United on Sunday to cap a dramatic and remarkable season.

They are seven points clear of Tottenham and need just three points from their final three games to win their first top-flight title in their 132-year history.

Schlupp was on trial at Old Trafford during 2012-13, Sir Alex Ferguson’s final season, before he returned to Leicester and broke into the team.

United have won 13 Premier League titles but the Foxes are 90 minutes away from upsetting the establishment and Schlupp feels he owes the Red Devils for helping him achieve his dream.

He said: “To me, it was an opportunity, I went there, saw how it worked and came back here a better player. I did meet Sir Alex a couple of times actually. He was really nice to me and just told me, obviously, I’m here because I’m a good player, just to enjoy it and then who knows what will happen.

“I don’t think I could ever turn down a move to Manchester United but I didn’t get the opportunity at the time. However, it has moulded me into the player I am. Leicester City is my club, has always been my club and I’m grateful to be here.

“It is a dream to win it there and get the trophy at home. But we have to take each game as it comes. Of course, we will try and do it.

“I was talking to some friends during the Tottenham-West Brom game and I was thinking we are literally one win away from a dream since I was young.

“It is surreal at times but as professional footballers, we are here to win things and we have a good opportunity now.

Boss Claudio Ranieri, who has never won a top-flight title, replaced Nigel Pearson last summer and was favourite to be the first manager sacked this season but has lost just three league games.

Wideman Schlupp revealed the squad had no idea who their new boss would be while they were pre-season training in Austria and admitted to being star struck when Ranieri first met them.

The 23-year-old said: “He was always a big name, even growing up in Germany, I knew who Claudio Ranieri was and I knew he’d managed big clubs. His CV speaks for itself really, he’s managed top clubs and he’s a top manager.

“When he walked into the room, in Austria, we didn’t know ourselves actually (who it was going to be).We were all gathered and then he walked through.

“It was ‘yeah wow it’s Ranieri’. He’s a big name and it was just excitement I think. He’s proved himself.”