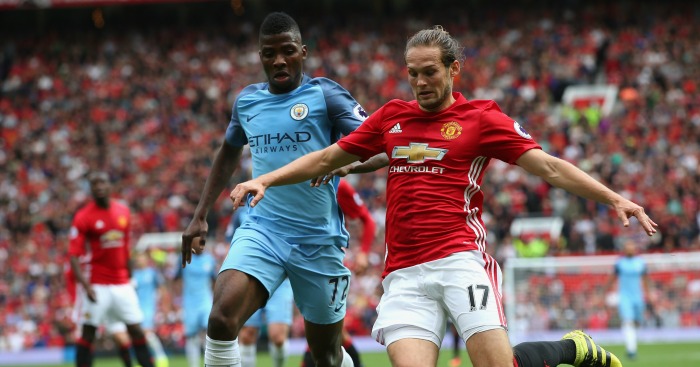 The Red Devils were slow out of the blocks at Old Trafford on Saturday and were made to pay as they slipped to a 2-1 loss to rivals City.

Scholes is unsure Blind and Valencia have long-term futures in Jose Mourinho’s starting XI after their poor performances in the disappointing defeat.

“Blind is a better defensive midfielder for United than he is a centre-back but he’s been an excellent partner for Eric Bailly so far this season, hence why Chris Smalling is not in the team at the moment yet he’s not won everybody over yet,” said Scholes.

“Why? Because he’s physically limited in the Premier League and people are expecting him to be found at some point, I suppose I still am, and against City he was found wanting against a dynamic Kevin de Bruyne.

“I would rather see Smalling partner Bailly in the long-term.”

Valencia, who has been deployed at right-back under Mourinho, also came in for criticism from the former England international.

“As for Valencia, he’s not a right-back. He never will be, regardless of how good his form is at any one time,” added Scholes.

“But Matteo Darmian hasn’t got a sniff yet and there are different questions to ask about whether Timothy Fosu-Mensah is ready to start right there, so it’s a more difficult situation.”