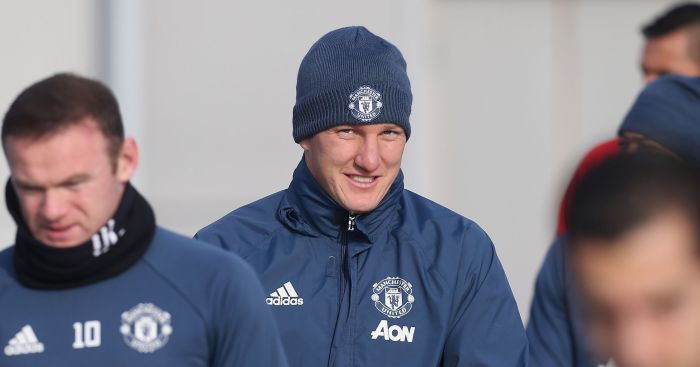 Manchester United midfielder Bastian Schweinsteiger has held talks with the Chicago Fire about a move to the MLS club.

Schweinsteiger is yet to play a single minute under Jose Mourinho in the Premier League this season and he met Chicago head coach Veljko Paunovic in Manchester on Friday.

Press Association Sport understands negotiations with the former Germany captain are still at an early stage and nothing has been formally agreed.

The regular MLS season concluded at the end of last month and Paunovic has been in England as part of a European scouting tour.

Schweinsteger is understood to be keen on a switch to America and now considering his options, with Chicago not the only club to have expressed an interest in the 32-year-old.

Paunovic, however, wants to have his squad assembled in time for pre-season, which will begin at the end of January ahead of the new season starting in March.

Schweinsteiger would certainly represent a major coup for Chicago, who finished bottom of the Eastern Conference last term.

Schweinsteiger has returned to first-team training at United after initially being told by Mourinho to train with the reserves.

The former Bayern Munich midfielder does not appear to have a future at Old Trafford but has not given up hope of playing in the Premier League again.

“I’m trying to keep myself fit for the situation in which I am needed,” he said in a video produced during an advertising shoot with German snacks manufacturers Funny Frisch.

“Hopefully I will be given a chance. I look forward to training every day, and being able to train with the team. I don’t know if I will get a chance, but I hope so.

“I still feel fit at 32 and certainly want to play more years at the top level and of course I want to win things.

“We won the FA Cup last year and that was also one of my aims. Of course it would be great to play for United in the Premier League and perhaps win it.

“If I am needed, I will give everything – I am ready.”

It has been a difficult few months for Schweinsteiger.

The 2014 World Cup winner was given an emotional testimonial by Germany after announcing his international retirement but has not been given a chance for his club.

“I’m not one to think of burying my head in the sand – I’ve always been a positive person and still am now,” Schweinsteiger said.

“My rhythm is good – of course it’s different when you play each weekend compared with when you are only training – but I enjoy my football.”

Schweinsteiger joined United from Bayern Munich in July 2015. He has made 31 appearances and scored one goal for the club.