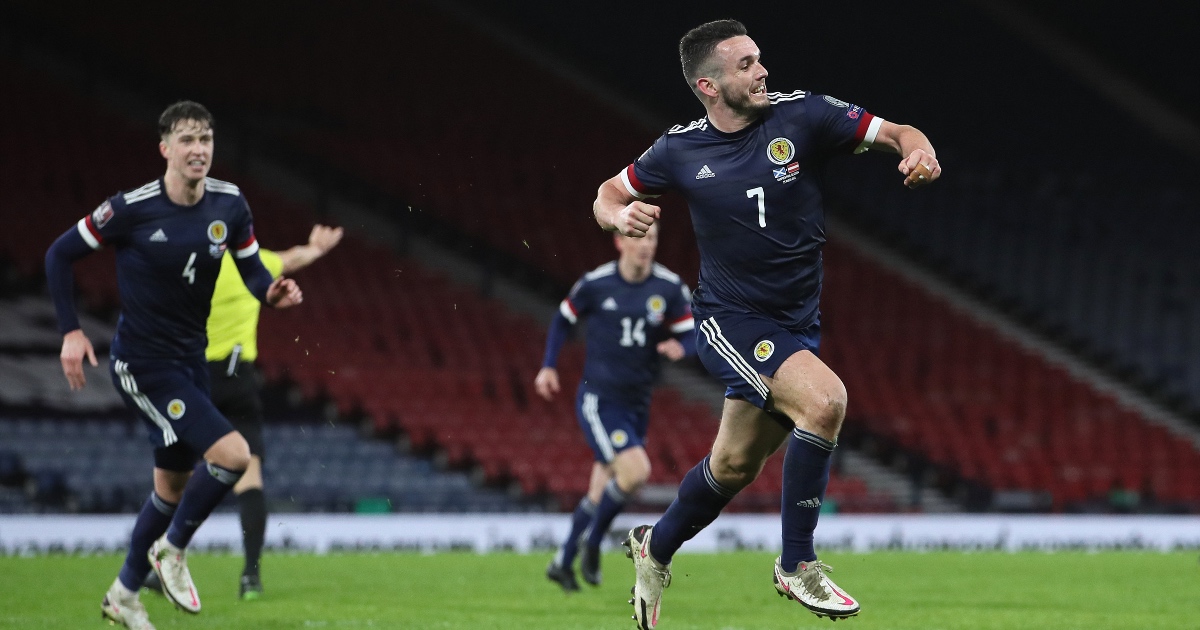 John McGinn’s superb overhead kick rescued a point for Scotland in the 85th minute of their opening World Cup qualifier against Austria.

Steve Clarke’s side twice came from behind at Hampden to seal a 2-2 draw following a thrilling second half.

Norwich defender Grant Hanley headed Scotland’s first goal in his first international for three years but Sasa Kalajdzic headed his second goal of the night in the 80th minute.

McGinn’s inspired piece of play earned Scotland a point their play merited after a slow start and they might have had more with Ryan Christie denied a strong penalty claim.

Both Hanley and Jack Hendry made their first international appearances since 2018 in the back three with Scott McTominay moved forward into his natural midfield role following his recent goalscoring form for Manchester United.

McGinn lined up beside McTominay with Christie and Stuart Armstrong supporting Lyndon Dykes.

Austria signalled their intent inside 60 seconds when Christoph Baumgartner drove forward and Kalajdzic swept a loose ball wide from 16 yards.

The visitors dominated possession in the opening quarter and David Marshall made a decent stop from Baumgartner after one flick had breached the Scotland midfield.

Steve Clarke’s side were struggling to get into the game but they improved towards the half-hour mark and Armstrong had a couple of wayward shots.

Christie had the chance of the half in the 42nd minute after goalkeeper Alexander Schlager passed the ball straight to Dykes. The forward set up Christie, who sidestepped a defender but saw his effort stopped by the keeper’s foot.

The Celtic midfielder forced another decent save before the break following a well-worked free-kick.

The opener came in the 55th minute after Marshall could only push Florian Grillitsch’s bouncing long-range effort in front of him. Kalajdzic got ahead of Hendry to net amid offside appeals.

Scotland should have had a penalty within a minute when Stefan Ilsanker lost track of an aerial ball and wrapped his arms around Christie. Spanish referee Carlos Del Cerro Grande delivered a theatrical ‘no foul’ signal.

The hosts soon came close when Armstrong burst into the box but fired a yard beyond far post when a more subtle approach might have set up Dykes.

Kalajdzic then headed home from close range but was penalised for a push on Kieran Tierney.

Che Adams came on for his debut in place of Southampton team-mate Armstrong in the 66th minute and Scotland levelled five minutes later.

Ilsanker expected his goalkeeper to come out and claim Stephen O’Donnell’s free-kick from near the halfway line and Hanley was able to head home unchallenged from seven yards.

Scotland sensed the three points were there for the taking and a couple of low deliveries from Andy Robertson caused problems. Austria survived a goalmouth scramble before Dykes just failed to make contact with the second cross.

But the visitors were not content to sit back and Kalajdzic got to Stefan Lainer’s cross ahead of Hendry and headed into the top corner from 12 yards in the 80th minute.

Scotland again showed their spirit and McGinn produced his piece of magic after Christie headed a half-cleared cross back into the box. The visitors claimed for offside but replays showed the Aston Villa man was half a yard on.

Both sides pushed for a winner and Hanley headed wide under pressure before McTominay curled a free-kick well over in stoppage-time.