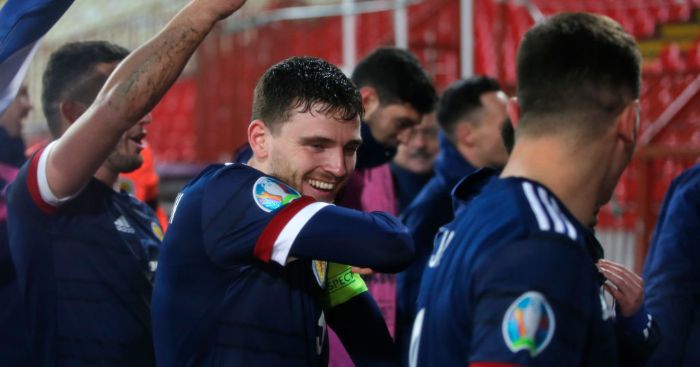 Scotland boss Steve Clarke thinks Andy Robertson could play a part in their match against Israel on Wednesday in a promising injury update for Liverpool.

Virgil van Dijk, Joe Gomez, Trent Alexander-Arnold and Fabinho are all currently on the treatment table, with news of a hamstring injury for Robertson coming as a further blow for Jurgen Klopp.

There had been worries that Liverpool left-back Robertson would be unavailable for their match against Leicester City at the weekend but Clarke claims he could even feature for Scotland on Wednesday evening.

The Reds head into the game as the sports betting with Betfair favourites for victory, with current odds of 9/10 for that outcome.

“There were three or four players who could have done with another 24 hours, just to get their recovery right,” Clarke told The Scotsman.

“The game came a little too soon for them.

“Andy was probably a little bit worse than the rest, which is why I left him out. It would have been too big a risk. But he’s coming to Israel so we’ll assess him over there and hopefully get him on the pitch. That would be good as we’d like our captain on the pitch.”