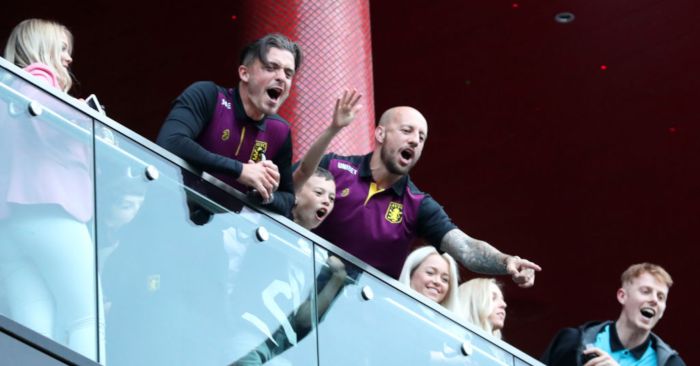 Aston Villa manager Dean Smith has cut a swathe through his squad as he plans for a return to the Premier League by releasing eight players.

Full-back Hutton, in particular, became a cult figure at Villa, nicknamed ‘the Scottish Cafu’, he made 202 appearances over eight seasons with the club.

Smith gave 34-year-old Hutton the honour of leading out Villa for the club’s final league game of the Championship season last month, a 2-1 home defeat to Norwich.

Adomah was another popular character, notably scoring 15 goals last season en route to Villa reaching the play-offs, only to lose 1-0 to Fulham in the final.

Although the 31-year-old made 42 appearances this season, including playing for 73 minutes of the play-off triumph over the Rams, Smith has determined he is surplus to requirements.

Midfielder Jedinak made 80 appearances during his three years at Villa Park following a £4million move from Crystal Palace.

The 34-year-old, who found himself marginalised this season, will likely be remembered for scoring one of the crucial penalties in the play-off semi-final shootout win over West Brom at The Hawthorns.

Whelan, 35, made 73 appearances, with his last in the first leg of the play-off semi-final in which Villa beat Albion 2-1 at home, with his departure midway through the second half for Conor Hourihane proving the turning point.

Defender Richards played just 31 times in four years after joining Villa on a free transfer from Manchester City, while 31-year-old Elphick managed 46 appearances in his three years following a £3million move from Bournemouth.

Another defender in De Laet, currently on loan with Melbourne City, made only 14 appearances in his three years with the club.

Bunn, among five goalkeepers on Villa’s books, made the last of his 21 appearances in a 3-3 draw at home to Preston at the start of October, a game in which former manager Steve Bruce had a cabbage thrown at him, with the result leading to his sacking the day after and the arrival a week later of Smith.