He looks like a schoolboy and the old Scottish guard aren't happy. Johnny is amused in Chillyjockoland. 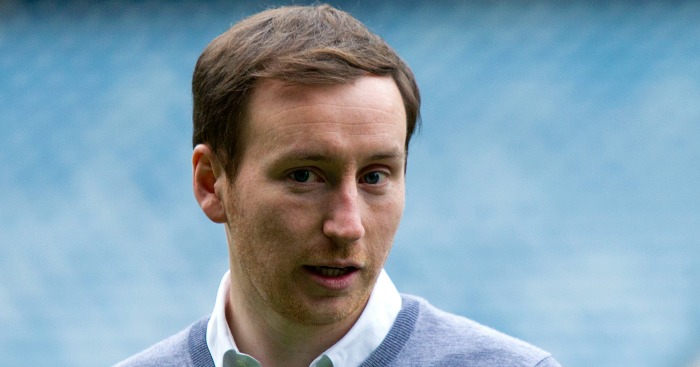 Unless you live here in Chillyjockoland, you may not have realised, but in the last week Scottish football has been tearing itself to pieces over the appointment of a man called Ian Cathro as the new Hearts manager. It’s been fascinating to witness, partly for the petty nature of the whole thing, but also because it paints so clearly the schism that has opened up in football between modernisers and traditionalists or, in F365 terms, between laptop gurus and proper football men.

The brief facts are these: Cathro has been made Hearts boss after Robbie Neilson moved down to MK Dons following a successful period at Tynecastle. He left them in the top four after achieving promotion, then a third-place finish and a spot in the Europa League. He’d been a left-field appointment as he was in his early 30s and had no managerial experience at all after his playing career had ended early due to injury. Nevertheless, he did really well.

Cathro’s last job was as a coach for Rafa Benitez at Newcastle United, having been taken on by Steve McClaren. Before that he’d been a coach in the top flights of Spain and Portugal, after starting coaching at Dundee United. Cathro is held in very high regard as a coach by all who have worked with him, but had no playing career at all, except at youth level.

Having had success with the untried Neilson, Hearts chairwoman Ann Budge and Director of Football Craig Levein rather creatively thought the club would go down a similar route and went for Cathro. As he’d never been a manager, it was clearly a risk, but they wanted to try something new.

This has made a lot of Scottish football’s old guard furious. Why?

He’s only 30.
He’s never played the game.
He’s never been a manager.
He’s a coach.
He uses a laptop.
He’s not part of the north of the border football jockrocracy.
H looks a bit weedy and is no one o’ the boys.

“He’s one of the up-and-coming, modern-era coaches who can organise a session just by flicking open his laptop.”

He doesn’t mean this in a good way. This is a football dog whistle.

Boyd had been on a coaching course with Cathro and was unimpressed by him, painting him as introverted and, in essence, a computer nerd. It sounds suspiciously like Boydy was flicking his ears with a ruler while Ian was trying to do some work. But now, this small triumph of the nerd over the macho man is rather annoying Mr Kris, it would seem.

Daggers have been drawn and sides taken. Jamie Fullarton weighed in to back up Boyd’s claims of Cathro not being up to the job. Even though it was nine years since he had encountered the new Hearts boss, he made him out to be a somewhat odd, distant person or, perhaps, as the rest of us might typically call it, intelligent. The idea that a man might not have changed and grown from 21- 30 suggests a lack of ambitious thinking by Fullarton, to say the least.

Boyd has since unsuccessfully tried to row back on some of this snark and bitching. His most recent Sun column headline read: ‘Those who claim I had a go at Hearts boss Ian Cathro need to take the day off…and I stand by it.’

Does that actually make any sense? No. Still, we don’t look to Kris for anything other than goals. I saw him playing for Kilmarnock a couple of years ago at Hibs. He did quite literally nothing all game, but for one occasion when he pulled away from a defender and got a yard of space. Goal. It was wonderful example of the heavily timbered striker’s art form.

But if you have any doubt about how angry some people are about this matter, watch this clip featuring Stephen Craigan and superhero/agent provocateur, Chris Sutton. Watch how quickly the passions rise in Craigan as soon as Cratho’s name is raised. It’s a wonderful clip, not least for the expression on Alan Stubbs’ face.

If you look dispassionately at Cathro’s career to date, he has worked hard, is tri-lingual, has progressed to a high level, and is still clearly developing his talents. Everywhere he has worked, people have had gilded their words of praise for his ability.

But none of this matters to the likes of Boyd, brought up in the old school. In fact, it makes them all the more suspicious. Who wants foreigners praising you? They don’t know the league.

But in case no-one has been paying attention, Scottish football is, to say the least, in the doldrums. It’s widely seen as stuck somewhere around 1982. The fact Neilson went from one of Scotland’s biggest, grandest old clubs to Milton Keynes tells you everything you need to know about Scottish football, both economically and culturally.

The old way of ex-players walking into jobs, or the same old fat blokes getting the same old jobs for the boys, is failing Scotland in a major, perhaps fatal way. It’s desperate for new ideas and new approaches. And that’s what Cathro’s gig is. It may not work out, he may be an outlier for a new movement, or maybe Scottish football is terminally wedded to its path to extinction on the European stage. But trying something different should be surely be applauded.

But, as we know, conservative people tend to fear change out of narrow-mindedness and because the status quo has benefited them so much. In this case, they don’t resist it by argument, because they have no arguments, instead they resist it by being nasty, by verbal bullying and calling a man’s character into question. It really is like at school when the bully pushes the nice boy over as he’s tying his shoelaces, in front of the girls, not realising that in doing so they only make the girls synpathise with the victim.

In many ways this isn’t even about Ian Cathro, the man; it is about what he represents and this is a fight playing out all over British football.

You could hear the same spirit in the criticism of Pep Guardiola after Manchester City’s defeat to Leicester City. That his supposed sophistication is nothing of the sort and it really just means running around more, as Sean Dyche would have it. That it’s been painted as a new art form when it isn’t. There’s an army of people waiting to gorge on this world view.

Catho was called a genius by one of his ex-bosses in Portugal. I reckon the traditionalists hate this more than anything else, dismissing the views of foreigners as though worthless.

Laptops in a football context infuriate them, and are used as a metaphor to suggest limp-wristed insubstantiality; to hint at someone not being a man’s ma, who won’t be able to manage ‘grown men’. It’s as though, to these Luddites, Cathro is a 30-year-old hild.

Hearts lost 2-0 to Rangers this weekend. I think I can hear Boydy crowing from here.

This is just the first firing shot in a long war, but it’s a battle that both sides really want to have, both feeling they are right. But however Cathro does, his appointment has picked off a big scab and opened up a deep wound in Scottish football. But what do I know? I’m just a laptop guru.