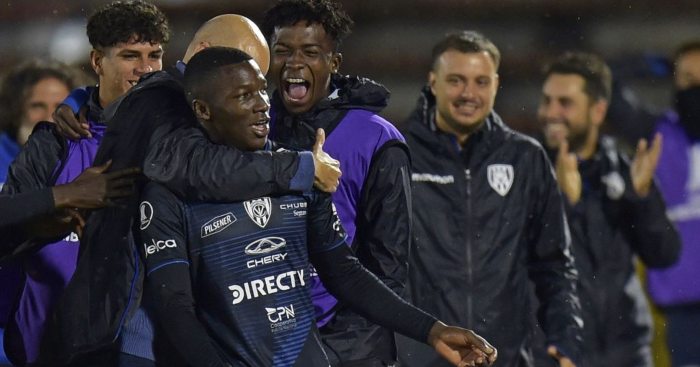 There are still lots of details to sort out before Man Utd can seal a transfer for Independiente del Valle midfielder Moises Caicedo, according to reports.

Caicedo only made his first-team debut for Independiente del Valle in October 2019 but since then his career has taken off at a rapid rate.

The 19-year-old’s form for his club has seen him make four appearances for his country, grabbing a goal and an assist in the process.

OPINION: How will Man United behave under extreme pressure?

Reports in Ecuador have been claiming that a deal for Caicedo is ‘all agreed’ and that only ‘legal issues’ remained before he could complete a move to Old Trafford.

A fresh rumour on Monday indicated that Independiente del Valle had ‘not yet agreed’ to his sale and had now ‘put a price’ tag of €10m on his head.

And The Athletic back up those latest reports by saying ‘the deal is not as certain as is being made out in the player’s South American homeland’.

They claim Man Utd are ‘interested’ but that ‘the truth is that no such terms have been finalised’ over a reported €4m deal.

‘Talks are yet to even take place’ with Independiente del Valle but that his ‘profile fits’ with their latest acquisitions in the form of Amad Diallo and Facundo Pellistri.

The Athletic continue that ‘multiple agents’ working for Caicedo makes it difficult ‘nailing down exactly who has the mandate to act on the teenager’s behalf’.

Sources have told the online publication that ‘a bid is expected’ but that they also ‘urge caution’.