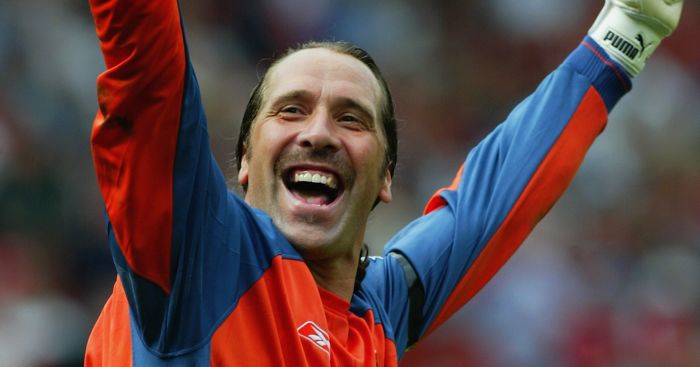 David Seaman admits he celebrated wildly when playing for Manchester City against his former club Arsenal.

The Gunners legend was talking to Alan Brazil Sports Breakfast about Frank Lampard’s return to Stamford Bridge on Wednesday night with the Chelsea legend claiming he won’t celebrate if Derby score.

And Seaman recalls celebrating madly when City scored a goal not long after he had left Arsenal for his new club.

When asked if it was ok to celebrate against a former club, Seaman told talkSPORT: “It depends on how you’ve left.

“I remember when I want to Man City, we played Arsenal quite early on in the season and we scored first and I went absolutely crazy.

“I was running around, giving it loads, and I just noticed Thierry Henry looking at me and he was like, ‘David, what are you doing?!’

“But that was because I felt that I could still play and the offer I received from Arsenal wasn’t brilliant, so I felt I had something to prove.”

"I went absolutely mental!"@TheDavidSeaman says he couldn't help but celebrate when his Man City side scored against former team #Arsenal… and Thierry Henry did NOT like it! 😂

Do you have a problem with players celebrating goals against former sides? 🤔 pic.twitter.com/WiwpDWQmHz