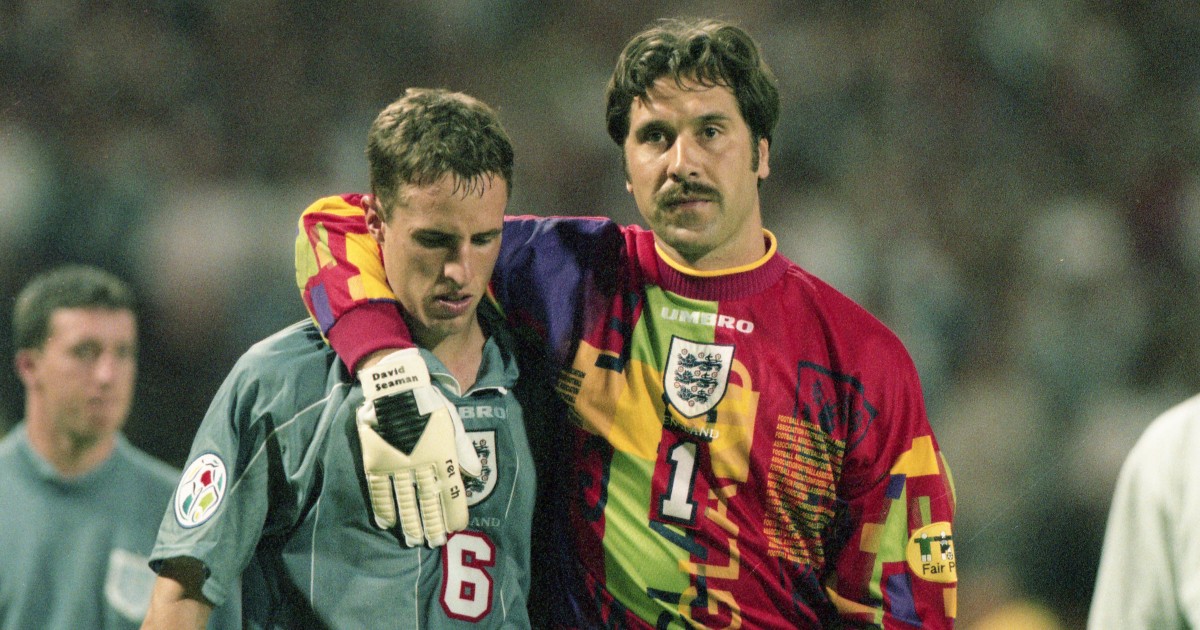 All eyes will be on Wembley as the Three Lions look to build on an unbeaten group stage against Joachim Low’s men in front of a partisan crowd of more than 40,000 on Tuesday.

The match brings up memories of previous disappointments against Germany, having bowed out to them in the 1970, 1990 and 2010 World Cups as well as the European Championship semi-finals 25 years ago.

READ MORE: This England generation must ignore blizzard of bullsh*t

Southgate saw his crucial spot-kick saved in the latter exit, but optimistic Euro 96 team-mate Seaman believes that moment might give his players a little bit extra on Tuesday.

“Of course he’d be fed up with it – but he’d be using it as well,” the 75-cap former England goalkeeper told the PA news agency.

“He’d be using it as a confidence tool to probably show the lads… you know, the lads know that he was the guy that hit the penalty that cost us.

“They will be thinking ‘well, you know, this would be nice to do it for Gareth as well’.

“That’s why, in a little way, ideally I would like you to go to penalties but only if you can guarantee that we win! Just for karma on Gareth’s sake.”

England lost the Italia 90 semi-finals on penalties to West Germany, before going out at that juncture in the same manner to Die Mannschaft at Euro 96.

But the current Germany side have put in Jekyll and Hyde performances under departing head coach Low, making Seaman confident of Tuesday being a night to cherish.

Asked if he feels optimistic or as if the last-16 clash is on a knife edge, he said: “It’s both. I’m very optimistic.

“I don’t know why but I’ve just had a feeling since before the tournament started, especially with the squad – not just the team, the squad is really strong.

“We’ve got through the group stage without actually playing our best football, so the best is yet to come. But it needs to come, if you know what I mean?

“We need to step up because the next few knockout games are going to be tough and there’s no tougher than the rivalry between England and Germany.”

The fact a Booking.com poll found 80 per cent of England fans would feel just as emotional beating Germany as they would winning the Euros underlines the strength of feeling heading into Tuesday’s match.

But Southgate’s squad have repeatedly spoken in the build-up about how they do not carry the scars of previous disappointments, with the group instead talking about making their own history.

“It is (good the players are thinking like that),” Seaman said. “And what we always seem to do is bring up negatives when we’re going into a game against Germany.

“Alright, there is a few! But there’s also some positives, like the 5-1 win in Munich. That’s got to class as one hell of a night.

“Knowing how good that felt after that game, I would want this England squad to get something of that feeling and I’m sure they will, especially if they go out on Tuesday night and get through.

“Whether they play rubbish or whatever, a win is a win. It’s about getting through the round and that’s what they need to do.

“I think that they’ve got a good chance because this Germany team and squad that we’re looking at now is a little bit unpredictable and that’s not normally the German way.”

Former England number one Seaman is also confident in the man between the sticks.

There had been questions about Jordan Pickford building into the tournament but the Three Lions goalkeeper has produced some fine saves and kept three clean sheets so far at the Euros.

“You can’t fault him for England,” Seaman added. “He’s never let England down,

“He’s always been really good. He’s made some good saves in this tournament already and long may that continue.”