Home Arsenal Seaman: Vieira blanked me for weeks after I almost hit him 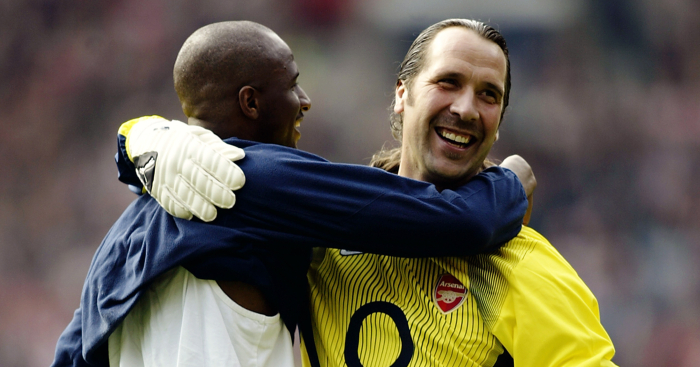 David Seaman has revealed that Patrick Vieira once stopped speaking to him for two weeks after a confrontation between the pair in Arsenal training.

After it emerged that Jamaal Lascelles ‘went for’ Matt Ritchie after Newcastle training last week, Seaman recalled similar happening during his playing career in north London.

“That happens a lot and it happened at Arsenal,” he told talkSPORT. “I got involved with Patrick Vieira once. He wound me up a little bit.

“We’d be playing 8 v 8 and every time I’d go up for the ball he’d have a little niggle with an elbow. It was funny to start with and then he carried on.

“I’d be like, ‘okay, just to take it easy’ but then I went up for a cross and his elbow hit me on the side of the head and I just saw the red mist.

“When I came back down I landed on him, pulled my fist back to punch him, but thought I’d better not so I just gave him a little tap, shall we say, on his forehead and he wasn’t happy.

“He didn’t speak to me for two weeks.

“I’ve seen Wrighty and Nigel Winterburn have a right good old ding-dong. Wrighty was involved in a few, Tony [Adams] would leave a bit on people and there was a lot of squaring up.

“The little five-a-sides in the gym were naughty, but feisty. Back in the day when Arsene first came in, training sessions were competitive because we knew he’d pick players from training and the standard was high.”