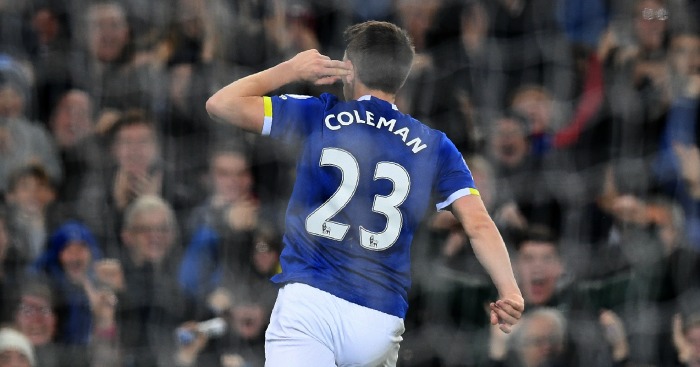 The inference there is clear. In fact, it is so clear that we cannot possibly call it ‘inference’; the BBC are saying that Seamus Coleman thinks so little of Everton fans that he thought they would have a problem with him donating money to a stricken Liverpool fan.

At a time when Coleman has been criticised by sections of Everton’s support for his form this season – leading to an over-the-top celebration of his goal against Brighton on Saturday – this would be pretty ill-advised.

His quotes are not even open to interpretation. He said: “You think ‘Do you put your name towards it or not?’. You might get people saying ‘he might have put more money in’ or whatever.

“I wanted to put my name to it because sometimes that raises more publicity. That’s what the Liverpool manager did.”

Mention of Everton fans? Absolutely none.

Faith we now have in BBC Sport? The same.

Punditry of the week
Michael Owen said on BT Sport that Liverpool were “in command of the game for the first 20-30 minutes”.

Pesky fact: Liverpool were 2-0 down to Red Star Belgrade after 29 minutes.

Mediawatching Media Watch
This is Mediawatch but there is a Media Watch (note the subtle difference) elsewhere on the internet. Obviously inferior. A tribute act, if you will.

That Media Watch is written by the good people of Manchester City, who take it upon themselves to round up all things City from various newspapers and websites. Which is nice.

So when various newspapers and websites are absolutely brimming with allegations of Manchester City’s blatant disregard for FFP and likely action from UEFA, they must be pretty busy bees.

Yep. That’s exactly what the media are saying about City.

Poor Vorm
Mediawatch can only presume that somebody at the Daily Mirror has a sense of humour to headline Darren Lewis’ piece from Wembley ‘A bad time to Vorm an opinion’; did they suspect he had formed his own opinion long before kick-off to make life a little easier?

How else do you explain why a late Tottenham win over PSV Eindhoven that just about keeps their Champions League hopes alive prompted an opinion piece about Michel bloody Vorm?

Hint: That’s not what everybody/anybody is talking about.

Playing the Fieldoo
The quick and easy answer to the question posed by The Sun online – ‘Could Fieldoo, football’s version of LinkedIn be the future of transfers?’ – is of course ‘no’. We then have a question of our own: ‘Why is this not accurately labelled as an advertisement?’

‘LinkedIn of football Fieldoo is the networking tool young Prem stars are using to get opportunities’ is the headline on the actual story. Which is odd because we have not heard of Fieldoo – mentioned by name an impressive 26 times in the piece – so it seems unlikely that ‘young Prem stars’ are using the tool.

‘A NETWORKING site dubbed the ‘LinkedIn of football’ is developing a new service which aims to find foreign clubs for young English players struggling to break through at Premier League academies.’

We will stop you there. Dubbed by who? The only reference we can find to Fieldoo being the ‘LinkedIn of football’ is from Fieldoo themselves. Can you ‘dub’ yourself? If so, Mediawatch has been dubbed the greatest column on the whole of the internet.

And now we hear that it ‘aims to find foreign clubs for young English players’, so it’s not a ‘networking tool young Prem stars are using to get opportunities’ at all. It’s almost like this is all absolute bollocks designed to advertise and boost the Google rankings of Fieldoo.

And it is at this point that we realise we are inadvertently helping Fieldoo. Balls. Clever work, Slovenian innovators.

We are now in too deep to turn back…

‘Klemen Hosta, founder and CEO of the site, which is based in Slovenia, told SunSport that more than 3,000 transfers have occurred as a result of a contact made on Fieldoo.

‘These include Argentine striker Jordi Pascual, who in 2014 signed for Spanish club Girona, aged just 19, and now plays in Italy.’

Now this is just excellent. Because of course Pascual never actually played for Girona and the words ‘now plays in Italy’ are more than a little misleading; he was released by Serie D club Palmese 1912 this summer.

If this is the player and transfer that you are using to advertise your brand then we really do not think this is the future of transfers. Sorry, guys.

It really is all the most wonderful fluff – and you can read it all here – but this is definitely our favourite line:

‘Around 150 clubs use the site, including two who have played in the Uefa Champions League, all the way down to teams in Germany’s eighth tier.’

This season alone, clubs who have played in the Uefa Champions League include Lincoln Red Imps, Víkingur Gøta, Drita and Torpedo Kutaisi.

It’s not a long way down to Germany’s eighth tier.

Adam Bate on the growing gulf between Manchester United and City