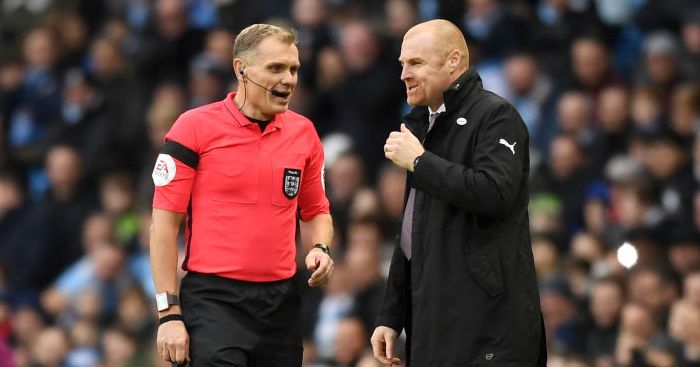 It was in December 2017 that Stan Collymore used his platform as a national newspaper columnist to – rather than accuse other pots, kettles and various kitchen appliances of showing ‘an extreme version of their emotions’ – declare Jurgen Klopp guilty of ‘cowardice’ and ‘spite’.

The Liverpool manager had done little more than give short shrift to a question about the award of a debatable penalty to Everton in a 1-1 Merseyside derby draw. But such a reaction was nothing new: all Premier League managers have trodden that path before.

All bar one. ‘Burnley’s Sean Dyche is the only manager who’ll say, ‘Yep, we were awful today’, or ‘Actually, we were great,’ Collymore proclaimed. ‘And how refreshing that is.

‘The rest of them deflect from their own inadequacies and it’s like being in the playground rather than listening to a professional interview with a Premier League manager,’ he continued. Less than two years later, Dyche has proved beyond reasonable doubt the folly of such praise. What was once ‘refreshing’ has long since turned stale.

Three weeks ago, he described Burnley as “a cautionary tale of when it goes wrong” with VAR. A 2-1 defeat to Leicester was compounded by the decision to disallow an equaliser from Chris Wood in the 82nd minute. “I’ve seen it back 12 times from different angles,” Dyche said. “Chris Wood doesn’t change his running gait. His eyes are only the ball. He’s not looked down to trip the fella. He’s running in a natural motion.

“He does catch the heel of Jonny Evans,” he added, making the prosecution’s case that much easier. “I think there was contact. But it’s not deliberate and he’s not going to get the ball anyway.”

A fortnight ago, he embarked on a lengthy diatribe about something he “can’t abide”: diving. After accusing Callum Hudson-Odoi of “shambolic” simulation and forecasting “massive trouble” if the issue is not dealt with seriously enough, Dyche offered a belated mea culpa.

“Please, by the way, if you’re going to report on this, don’t make it about that because just to be clear, Chelsea were too strong for us today. They hit us on the clinical moments and did what they should do. They’re a top side and a top side in form as well. This is not to try and divert off this.”

Yet he knew the consequences of his words: the headlines were dominated by Hudson-Odoi, not the thorough defeat Dyche himself admitted Burnley deserved.

And to this past weekend, when he questioned two penalty decisions and vented that “we don’t get many of them”, before conceding: “That would have got us out of jail. We were miles off first half and they were miles better than us.”

An insipid 3-0 loss to Sheffield United, in which they did not have a single shot on target, barely registered.

Only one team is on a current run of three or more consecutive Premier League defeats. Only one manager has publicly questioned a refereeing decision each time, despite acknowledging his side had not been good enough to make such complaints relevant. Only one manager has constantly tried to distract from their own man-made disasters by pointing frantically at the natural catastrophe of a debatable officiating call in the distance.

I've an idea this week could be the most important week in Sean Dyche's tenure. Some important decisions to make.

Jon Moss has not inexplicably refused to use Charlie Taylor this season in favour of Erik Pieters. Michael Oliver is not responsible for a failure to refresh a tired squad due to ineffective transfers and an insistence on playing with his old toya rather than the new ones that have been bought for him. Simon Hooper is not guilty of being unable to devise a tactical plan beyond ‘block all of the shots and lump it up to Ashley Barnes and Chris Wood’.

The recent absence of the latter has undoubtedly hamstrung Dyche, for whom Jay Rodriguez just cannot fill that void. Wood has missed the last two matches while Barnes was unavailable against Leicester. Dating back to October 2018, Burnley have lost the last ten Premier League games in which at least one of their towering strikers has not started.

Saturday felt like a watershed moment. A comprehensive defeat to a promoted team, masterminded by a coach carved out of the same misunderstood grit as Dyche himself, must – in his own words – “effect real change”. It was the sort of performance that will give a manager “food for thought for the next game”, if not a reserved seat at the nearest all-you-can-eat buffet.

The teams Burnley have beaten this season are currently 17th, 18th and 19th. Throw in two wins over a stagnant Bournemouth, struggling Brighton and relegated Cardiff, as well as victories against Championship-bound Fulham and Huddersfield, a volatile West Ham, Wolves and a Tottenham side in free-fall at Turf Moor, and you have the sum total of their league wins since the start of last season. In 2019 alone only four clubs have conceded more, Newcastle have more wins and four ever-presents have fewer points. Southampton, Brighton and Watford have all changed managers within the past 12 months, while Bournemouth have backed Eddie Howe with further investment.

And that might be enough. Survival only requires being better than – or not as troubled as – three other sides. But just as it felt like Burnley had outgrown a dependence on others to maintain their top-flight status, they are looking nervously over their shoulders again.

Dyche has been here before. Burnley certainly have. They were 18th at the start of the year but emerged from the rubble after a period of introspection and a recall for Tom Heaton. The latter is no longer a quick-fix option; a dose of the former, instead of officiating objections after a 3-0 defeat, would be welcome.