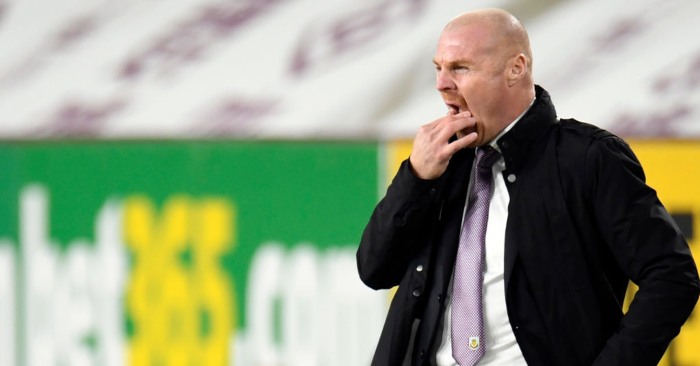 The options were so underwhelming that Sean Dyche barely cast a glance in their direction; four untested kids, two veteran full-backs and a reserve keeper meant that the Burnley bench remained entirely unused, despite the Clarets mustering only two shots on target. Dwight McNeil flung in 13 crosses without creating a single chance, the ball bounced off Chris Wood and the centre-backs struggled to contain Danny Ings, and yet all would have been left grunting on the pitch if the game had lasted four or five hours. There would be no first or last roll of the Dyche.

“The chairman knows what is required. Action. We need players,” said the manager, used to feeding off scraps but now finding himself gulping only at fresh air; with only days left in the window, his sole senior signing is a midfielder surplus to requirements at Brighton. The most Burnley of signings (31 and English) could not haul them out of the bleakest of situations: an already threadbare squad decimated by injuries, playing in front of an empty stadium just when a 12th man – or any man at all – would have been priceless.

An extraordinary seven first-team players were missing on Saturday – Ben Mee, James Tarkowski, Ashley Barnes, Johann Berg Gudmundsson, Jack Cork, Robbie Brady and Jay Rodriguez – with the greatest absence being felt in the centre of defence, which is where almost all Burnley victories are forged. With apologies to Jimmy Dunne and Kevin Long (who sound like fabricated Burnley footballers from a 1980s comic), they are nothing without their granite-hewn centre-halves.

“He’s got a sore toe, so we’re having to wait for that. He said to me it’s not serious, but it is sore, that’s the way that one is,” said Dyche with barely concealed disdain when asked about Tarkowski, the subject of several bids from West Ham and Leicester. When you are telling actual Sean Dyche that you are swerving a Premier League game with a ‘sore toe’, you are clearly wedded to the idea of a new challenge. Or a new face. Who could blame him? He is 27 and sitting further behind more limited defenders in the England queue. Informed reports suggest that he will leave as soon as £40m is offered.

Burnley being Burnley, any replacement will cost only a fraction of that price. “I try and manage the model we have,” says Dyche, citing the situation in 2013 when he lost Charlie Austin but brought in only free transfers. But that was a Burnley that had just finished mid-table in the Championship; this is a Burnley that has just finished mid-table in the Premier League and surely Dyche deserves more than a million-pound signing from Brighton. There must be a point when even scrappers get tired of scrapping.

That’s not to say that Burnley should throw out their financial model in this of all years, but it’s getting easier to envisage a situation where Dyche walks away. No sane Claret would be angry. They have an established Premier League manager in charge of a club still operating like one mired in mid-table of the Championship. After eight years, they owe him rather a lot more than he owes them.

At a conservative estimate, Dyche would be a strong candidate for half-a-dozen Premier League jobs if they became available. Those who spent years touting him for Big Six or even second-tier jobs were being unrealistic, but Dyche has proved several times over that he is elite among the non-elite. There is no better organiser of a defence or player of the percentages than the Burnley manager, who cannot seriously be enthused by the idea of another season combining escapology with juggling in the north-west’s least entertaining circus.

Of course, managers almost never actually walk away (without another job) because they only receive their severance pay if they are terrible enough to be sacked, but if Dyche were brave enough to make himself the exception, he would also make himself favourite for all but one of these jobs. Unlike Eddie Howe at Bournemouth, Dyche’s skills feel transferable and absolutely lend themselves to a quick defensive fix. Nobody poaches a fire-fighter; it’s being available that makes you valuable in that situation. He could be a looming shadow over the bottom half of the division rather than a fixture within it.