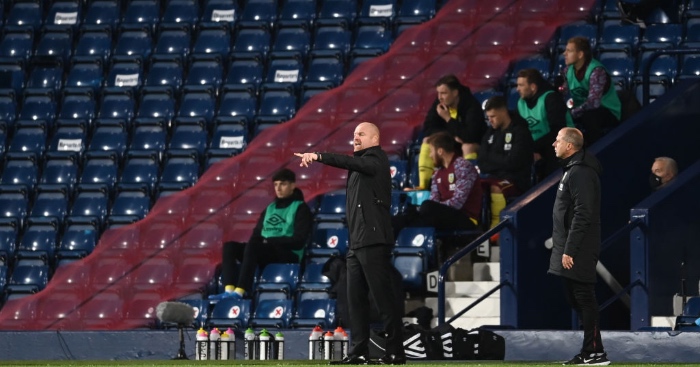 Burnley manager Sean Dyche has said his team’s draw against West Brom was a ‘strange game’ after neither side managed to score.

New signing Karlan Grant came close to breaking the deadlock for the home side when he put the ball into the back of the net from a Grady Diangana cross. The linesman’s flag was up, however, which kept it 0-0.

The visitors responded in the second half and hit the woodwork in the 63rd-minute thanks to a good header from marksman Chris Wood. Wood hit the crossbar again in the 70th-minute, although his chance was ruled offside.

READ: F365 Says: Spurs have peaked and distilled Spursiness to its very essence

“We looked more like us. We looked good defensively, the two centre-halves, the two midfielders were good and the attack. The point helps you going into the next fixture. We’ve had three out of four away games.”

Burnley currently sit 18th in the Premier League table after picking up one point from their first four matches. Their main problem has been scoring goals, as they have a goal difference of minus five.

As mentioned by Dyche, they’ve mostly had away fixtures so far and will be looking to bounce back at home next weekend. They play Tottenham on Monday 26th October at 20:00.

Meanwhile, West Brom sit 17th in the league after gaining two points from their first five games. They have two important league games coming up soon.

They play Brighton away from home on Monday 26th, before facing Fulham at Craven Cottage the following week.

Baggies fans will be looking forward to seeing latest signing Grant in future games after he came close to scoring his debut goal for them today.