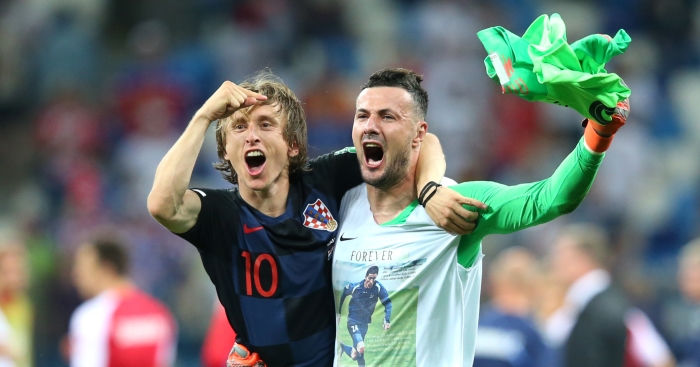 Croatia boss Zlatko Dalic saluted skipper Luka Modric after he shook off the disappointment of missing an extra-time penalty to help his side seal a shoot-out victory over Denmark.

The Real Madrid midfielder failed from 12 yards with the sides locked together at 1-1 after 120 minutes in their last-16 clash in Nizhny Novgorod, but converted from the spot at the second time of asking as goalkeeper Danijel Subasic saved three Danish penalties to lay the foundation for a 3-2 win.

The strain of opportunity certainly weighed heavy on Sunday.

Speaking at his post-match press conference, Dalic said: “He took the responsibility as a true captain. He scored and it speaks volumes about Luka.

“He said he wanted to take one in the penalty shoot-out – can you imagine what would have happened had he not scored? This shows the qualities of a great player and Luka is a great player.”

If it was Barcelona’s Ivan Rakitic who ultimately sent Croatia through with his side’s fifth spot-kick, it was Subasic who was the hero after saving from Christian Eriksen, Lasse Schone and Nicolai Jorgensen to book a quarter-final showdown with hosts Russia.

Dalic said: “He was our hero tonight. He saved three penalties in the penalty shoot-out – you don’t see that every day. He pulled us out when we needed it most.”

However, despite the early promise, the game failed to deliver as Denmark spiked the Croatian guns for long periods, although Modric should have won it after Mathias Jorgensen felled Ante Rebic inside the box in the 116th minute.

But Modric saw his penalty saved by Kasper Schmeichel, much to the delight of his father Peter watching on in the crowd.

Dalic admitted his team was far from at its best, but praised the fighting spirit of his players and warned them that will need to be just as resilient against the Russians.

He said: “This is going to be a huge match. We cannot relax, we must be even stronger and more stable because we are going to play a very difficult opponent, a great opponent.

“We will not let our guard down, there can be no arrogance going forward. We are happy with what we have achieved, but we know we have to do more.”