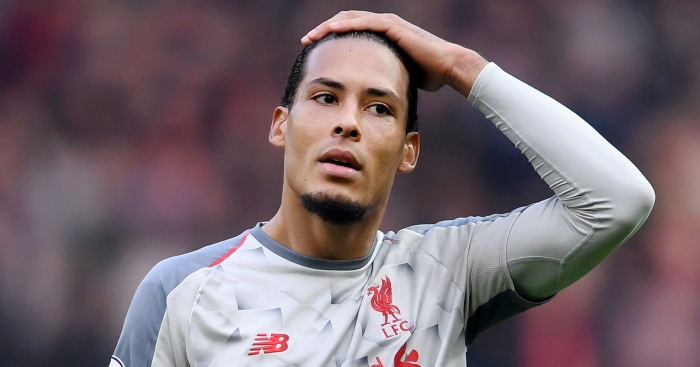 “If you’d offered everyone connected to Liverpool being a point clear in February, everybody would have took it.”

Took it? They would have sold bedside cabinets, games consoles and grandmas for that scenario. After finishing last season 25 points behind Manchester City, being one point ahead of the champions with just 11 games remaining is basically a miracle. In the rush to appoint ‘bottlers’ and ‘chokers’ it has apparently been ridiculously easy to forget that City finished a record 19 points ahead of their nearest ‘rivals’ as recently as May. We know modern attention spans are short but can we really not hold onto that information for long enough to resist laughing at a team for pulling off only a 26-point swing?

Points totals are obviously re-set to zero every summer but that does not mean that August brings equality. That 25-point disparity means something. It means that Manchester City were 25 points better than Liverpool last season. Burnley were closer to Tottenham, Leicester were closer to Chelsea and Brighton were closer to Arsenal; if any of those pairs of clubs were now separated by just a point, we would be talking either about massive over-achievement, startling under-achievement or a combination of both. Managers would lose jobs and others would be touted for promotion. And yet Liverpool have eradicated a 25-point deficit and people are describing them in national newspapers as ‘bottle jobs’ after they drew 0-0 at Old Trafford against a reinvigorated Manchester United. It’s actually preposterous.

Before City’s remarkable season, the biggest points gap for a Premier League title winner came in 1999/2000, when United finished 18 points ahead of Arsenal and 24 points clear of fourth-placed Liverpool. United were so much better than their rivals that they could afford to do nothing in the transfer market while Arsenal spent £50m, Leeds over £40m and Liverpool £30m in the wake of that humbling chasm. The result? United could afford to get significantly worse but still cruise to the title, with bookmakers paying out on their triumph at Christmas. None of those chasing teams improved and everybody shrugged; who could expect to get close to this great United side who had won the Treble only two seasons before?

Eighteen years later, the mistake made by Liverpool (and Tottenham) is to get closer, for to get closer is to expose yourself to the accusation that you have f***ed it. Liverpool are 12 and Tottenham eight points better than the same stage last season and yet both are on the verge of being written off as failures. As Daniel Storey so eloquently put it, ‘if Liverpool finish second, Tottenham third and Manchester United fourth, hardly a highly unlikely scenario, there will be four teams in the top six (Liverpool, Spurs, Arsenal and Chelsea) whose current managers will be accused of overseeing disappointment this season. And disappointment means fraudulence. It’s exhausting.’

And yet, the managers of Liverpool and Spurs were not derided last season, when they were left trailing in the wake of a rampant City. Now, after improving considerably – and it’s worth noting that Arsenal have also added eight points to their running total – they are bottlers, falling over hurdles that have only become important because they have sailed over others. In the late 2010s, the very worst thing you can do is look like you might possibly win something and then fall short. Losing in finals is so much worse than bowing out in the last 16 and finishing a close second is worse than finishing a distant fourth. As for finishing fourth when you look destined for sixth despite starting the season as second favourites…that’s the true path of heroes.

“It is so positive,” said Jurgen Klopp, discussing the ‘opportunity’ of the Premier League title race being entirely in Liverpool’s hands. He dare not say it for fear of derision but this would still qualify as a positive campaign for Liverpool if they finished a point behind City. And if that happens, they will not have choked, but simply been an excellent side beaten by a slightly better side over 38 games. Whoever said that second place is the first loser had not competed for the Premier League title against Pep Guardiola’s City.

There is even a scenario – a 1,2,3 of Manchester City, Liverpool and Tottenham, followed by a close 4,5,6 of the other three members of the Big Six with nary a point or two of separation – where every club could argue that they have done really rather well and should avoid the usual consequences of sacked managers and post-season inquests. Not that we should expect to see that unpopular theory repeated anywhere in mainstream or social media; in 2019, there can only be one winner, a handful of losers and one tale of redemption. And the roles have already been cast.