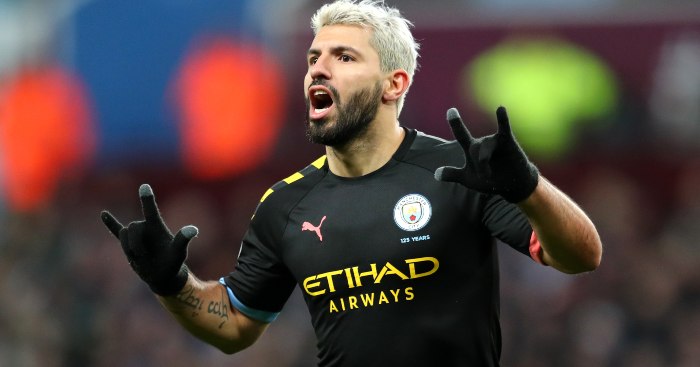 * With the 12th hat-trick of his Premier League career on Sunday, Sergio Aguero moved above Thierry Henry to fourth in the all-time top scorers list.

* But having hit 177 in 255 appearances, Aguero has a better goals-per-game record of anyone to have played in the Premier League.

* The players closest to Aguero are Henry and Harry Kane, both on 0.68 goals per game.

👏⚽️ There it is! Sergio Aguero is the greatest overseas goalscorer in Premier League history!

* With 53 assists, Aguero is also joint sixth on the list for goals created by the Premier League’s top 20 all-time top scorers.

* Of his 177 Premier League goals, 46 have been match-winners for City.

* In all competitions, Aguero has scored 249 goals in 359 appearances for City, making him the club’s all-time top scorer.

* Add another 100 netted for Atletico Madrid and 18 for Independiente and Aguero has 367 goals in 625 career appearances.

* Sergio Aguero has scored three or more goals 12 times in the Premier League, more than any other player. Alan Shearer is second with 11 hat-tricks; Robbie Fowler has scored nine, while Henry and Michael Owen have scored eight each.

* Aguero has scored 11 hat-tricks since the last time Manchester United managed one.

* Aguero has scored five goals in a game once against Newcastle in 2015. He also has two four-goal hauls against Leicester in 2018 and Tottenham in 2014.

* Aguero has netted 46 penalties during his career – but he has failed to score another 12.

🤔 Where does he rank among greatest ever Premier League players?#MCFC pic.twitter.com/gzQjBm0rbz

* Aguero’s favourite opponent is Newcastle. He has scored 15 goals in 11 appearances against the Magpies.

* The City star has also netted 15 goals in 19 games against Chelsea.

* Four of City’s five Big Six rivals feature in the top seven clubs that Aguero has scored most goals against.

* As well as 15 against Chelsea, he has scored 12 against Tottenham, 11 versus Arsenal and nine in Manchester derbies.

* Of the 33 opponents Aguero has faced in the Premier League, the only side he hasn’t scored against is Bolton. He will probably now never score against Bolton.

* Aguero has tended to be most potent just after half-time. He has scored 43 in the 15-minute intervals at the start and in the middle of second halves.

* He has also scored 37 goals after the 75th minute and seven more in added time.