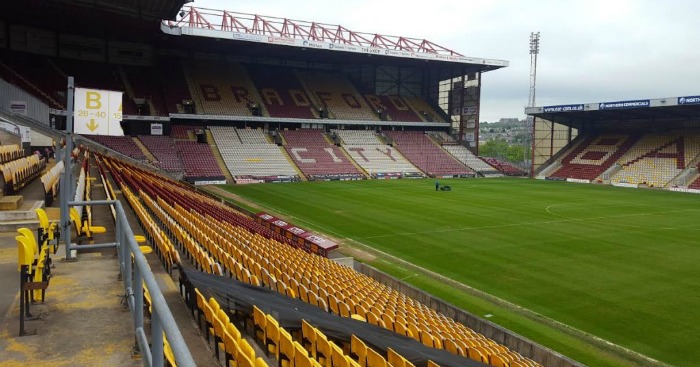 “There are kids in Bradford who can see the stadium from where they live. They play football from 9am until 1pm, when their parents call them in and say: ‘Football fans are here, let’s go home. When the football’s finished you can go back out” – Anwar Uddin, Football Supporters’ Federation diversity and campaigns manager.

There is a Bradford that you hear about. A Bradford where the council is struggling for funding, where education is failing, where three of Yorkshire’s seven most poverty-stricken constituencies can be found. A city in which mistrust and fear have long made their home.

This is the Bradford that is widely cited as the axiom of failed immigration and racial segregation, multicultural only because different cultures live adjacent to one another. This is Bradford, where over 54% of the voters chose Brexit, and where the city’s 140,000 Asian population still suffer abuse on a daily basis and are treated with explicit resentment. As one interviewee was only too happy to stress to The Guardian in 2015: “If you stand up on the hill, you used to be able to see mill chimneys. Now it’s just bloody domes.”

Walking from either of Bradford’s train stations to an out-of-town hotel takes you past a flashy new shopping centre that took over 11 years to build after financing issues, but that has had an impact: Over half the units on the city’s main street are empty. By the time you reach Canal Road, almost every building is an abandoned mill or dilapidated warehouse. The only growth in this part of town is provided by the weeds pushing through cracks in the mortar.

At most points in that 20-minute walk, Valley Parade is in view (it will always be Valley Parade, whatever the sponsorship deals). Bradford City’s stadium, just as with St James’ Park in Newcastle, somehow looks bigger from a distance than up close, perched on top of a hill and watching over the east half of the city. For years, ‘casting a shadow’ might have been a more appropriate description, as the club fell into disrepute and disrepair.

The cliché is that our football clubs are places of refuge, an escape from the rigours of everyday life. But for the city’s Asian community, Bradford City long felt like the opposite. Racist chanting and hooliganism were rife, the tribal element of football fandom allowing abuse to fester. Rather than providing the antidote to social disillusionment, Valley Parade was the epicentre.

That is the Bradford you hear about.

There is a danger of bad news becoming self-fulfilling prophecy. We are now hardwired into believing it, or at least into hearing it. Scratch a little deeper, brush aside the weeds, and there are shoots of recovery in Bradford. In its economy, in its football club, in its community.

The most damaging aspect of blanket bad news coverage and adverse statistics is that they muffle the work of the individual, those fighting for a better future. Individuals like Humayan Islam who, alongside Uddin, formed Bangla Bantams, one of the first Bangladeshi supporters’ groups in the country. In Bradford more than anywhere, such work breathes new life into communities.

Formed in February 2015, Bangla Bantams is the result of Fans For Diversity, a jointly-funded programme between Kick It Out and the FSF with the specific aim of increasing the diversity of match-going fans. If financial support helps to make it possible, so too does the tireless work of those such as Islam. He works a full-time job, coaches football in the local community, chairs the supporters’ group and acts as a mouthpiece between supporters and the club.

“We want to bring people together through football and make sure everybody feels confident in embracing their local football team and has lots of fun in the process,” Islam says. “Kids want to be footballers and there is no better education than watching Bradford City across the road. I would say Manchester United and Liverpool are the most supported teams – so where does that leave your local team?”

As Islam is keen to point out, the key is removing the fear. Elder members of the Asian community have stories of horrific abuse, vandalism to their property and regular physical violence, but that has improved beyond measure. The job of those in positions of community authority is to persuade the next generation that they need not adopt the fears of their forefathers. Change is coming.

“I think football was something that the Bangladeshi community thought was not for them,” Islam says. “With massive under-representation of Asian people on the terraces, there was a huge fear of the unknown. Now when we take 20 Asian women with head scarfs to a home game at first they are nervous and don’t know what to expect, but by the 60th minute they are singing and cheering.”

Bradford City’s new owners have played their part. Too many supporters’ groups feel as if they are fighting against the tide of their club rather than swimming with it. At Bradford, the mood is different. Low season ticket prices led to 17,500 being sold before the start of the season, and match-day prices were also reduced across the board.

of affordable football is very important to us,” said Edin Rahic in his first statement after the takeover. “We agreed the season ticket prices before we took over because we fully support the idea of cheaper ticketing. Having witnessed games here at the stadium we know how passionate the fans are.”

The club’s average home attendance has increased by 4,000 in just three years. In a sport typically addicted to short-termism, Bradford see and agree that getting young people from all communities through the door is crucial, particularly in an area suffering from such deprivation. The club’s work with the city’s Asian community in particular has been exceptional.

Bradford City has not always helped itself. In 2010, then joint chairman Mark Lawn said he was mystified by the club’s inability to attract Asian fans to the ground. “We have a dedicated room where people can go to pray, and we think we even invented the chicken tikka pie which is on sale at our ground as an alternative to the traditional meat pie,” Lawn said. “In some seats it’s cheaper for a family to watch Bradford City on a Saturday afternoon than taking them for a burger.”

The answer, as ever, is direct communication and financial support. When the Bangla Bantams ran a community day in May 2016, Bradford City allowed children to play on the pitch. “It ended up being 50-a-side,” Islam says, “but it’s great the club have literally opened the doors to the community.

“The club are now working really closely with us and have realised how positive it can be engaging with the community. More tickets have been bought by the Asian community, so the club are creating a genuine connection. People in our community are talking about Mark Marshall instead of Lionel Messi or Paul Pogba.”

This is not a fight that can ever be truly ‘won’; football’s problem is society’s problem. Last season, Sheffield United fans sung “You’re just a town full of ISIS” at Valley Parade, and Islam says he twice heard the abhorrent “Town full of P****” chant last season. Yet these incidents are reducing season on season, and Islam has his own answer: “When it happens we just have to sing even louder.

“We face challenges on a day-to-day basis, and you encounter some form of racism on a regular basis. It’s about making a positive change and leading by example. This is why the Bangla Bantams is key to bring people together from different backgrounds to educate.”

Islam is also keen to stress that his work is being replicated across the country, for these are the stories that truly deserve to be heard. His group were the inaugural winner of the FSF’s Fans For Diversity award in December, but were nominated alongside similar schemes at Southampton, Birmingham City and Derby County. He believes this is evidence of the lasting effects these initiatives can make:

“It means that the hard work and creativity of fans’ groups are given more importance and that we all need to continue to work in partnership together to achieve success. It shows that if you work hard, work with the right people and then listen and ask for guidance, you can do so much.” It would be hard to find any better advice, inside football or out.

Finally, I ask Islam for his one great hope for the Bangla Bantams and Bradford City, his one goal.

“Football really does bring communities together from all backgrounds,” he says. “I’ve seen it. It is fundamental now that we continue to work together through the power of sport. Football really can speak all languages and break down all barriers to unite us through a common goal.”

This, after all, is exactly what a football club should be: Not about the players or the ground or the directors, as Bobby Robson so famously said, but the supporters. A place where cultural differences are irrelevant. A place where all should feel welcome. In times of uncertainty – especially in times of uncertainty – a football club should be something that everyone should feel part and proud of.

Away from the negative stories, the bad news, the slurs and the stereotypes, Humayan Islam, Bangla Bantams and Bradford City are making a positive difference. A football club cannot change a city, but it can certainly set an example.