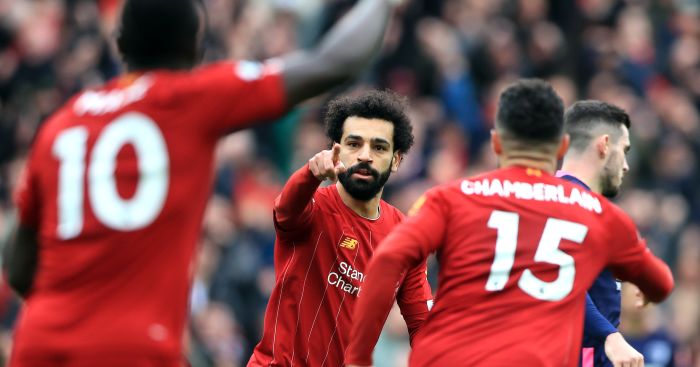 With the growing prospect that the coronavirus pandemic means the 2019/20 Premier League season may never be finished, the likes of Karren Brady and Jesus Garcia Pitarch have already solemnly had their say on what should happen in those circumstances and have both coincidentally arrived at conclusions that would happen to benefit their own clubs.

But what would truly be the best and fairest way for things to be decided this season if the remaining games can never be played? Here is one completely objective, scientific and clear-headed policy as proposed to us (not really, obviously) by each Premier League club…

Arsenal
We’re all starting to learn the importance of trends and discovering, often with mounting horror and a sort of dizzy nausea that means you have to sit down for a bit and start reflecting on the very many ways you have wasted your precious time on this planet, that where things are heading is far more important than where they began.

As such, any method of settling this incomplete season that gives equal weight to ancient and pointless history like for instance October or November would lead to a dramatically inaccurate outcome. No, much fairer to use only the most recent data, which is far more likely to accurately reflect what was to come. To make this as simple as possible, the 2019/20 season should simply ignore the 2019 bit. Only results since January 1 should count.

Aston Villa
It would be quite catastrophically unfair to decide something as important and life-changing as Premier League relegation based on an incomplete season. With traditional measures of producing league tables inadequate under these circumstances, rankings should instead be determined based on less tangible contributions a club has made to the success of the league in other ways over the last six or seven months, be that low-socked 90s-haired midfield scheming, transfer rumour hits generated or sudden and urgent relevance of club motto.

Bournemouth
Whatever. We’ve been through worse.

Brighton
While some selfish clubs recklessly continued playing football until just days before the global lockdown, some more forward-thinking and progressive ones had knocked it on the head long before and made their point about the absurdity of continuing with sport in the light of the growing international crisis by not winning a single football match in 2020. Should such clubs get reward for such altruistic foresight? Not for us to say.

Burnley
It’s the English Premier League. Only fair that in the event of being unable to complete the season the teams should be ranked according to percentage of goals scored by players from England. However, in order to reflect the realities of the modern, multicultural world in which we live, this should be extended to also include commonwealth countries such as, to pick an example entirely at random, New Zealand.

Chelsea
No need to complicate things. Current league table a fine way to settle things like European qualification or relegation. Probably not the title, though, because you could simply never rule out a dramatic slip from the current leaders however unlikely such an event may seem.

Everton
Look, we’re famous for being the friendly, family face of big bastard Premier League football. Our concern is not for ourselves. We’re worried for our friends and neighbours and are just absolutely and genuinely gutted that an incomplete 2019/20 season means it would, sadly but unavoidably, be completely impossible to award the title to any club this year.

Leicester
Using the current league table as it stands would appear to be a perfectly valid system for deciding European places and the like. No issues there as far as we can see. However, it would be reckless and wrong to simply award Liverpool the title on the basis they were 25 points clear and only six away from securing it. Before everything got canned, Manchester City were a mere 100/1 to somehow overturn this deficit in the last 10 games and win the league. Trust us, 100/1 is nothing.

Liverpool
Give us our f***ing title or you will never, ever, ever hear the end of it.

Manchester City
All teams retaining a mathematical chance of winning the league to share the 2019/20 title. How to settle the European places? Couldn’t give a f***.

Manchester United
There can be no league champions if the season is not completed. That’s the main thing. Very, very important. It would sully each and every one of our 20 legitimately earned titles to see one just handed out this year with a quarter of the season unplayed. Anything could have happened in those games.

It might seem very harsh on whoever is top of the league, can’t say we’ve looked, but strip the emotion away from the decision and the cold, hard logic of this is unimpeachable. As for other details such as Champions League places and the like, that clever chap at Juventus usually has some good ideas on this sort of thing.

Newcastle
We’re going to need some kind of mathematical formula to work out the league table and it seems only fair to reward the most effective football. In our opinion, the correct measure for this is to award points based on how far a team has exceeded its xG numbers across the season.

I had some free time on my hands so I made this. RTs will be appreciated. pic.twitter.com/sTXCKhSKJc

Norwich
In the absence of an acceptable final league table, the Premier League title should be awarded boxing-style to the first side this season to have defeated the reigning champions. Also, there should be a big shiny belt.

Sheffield United
Settle it however you want, lads, we don’t care. As long as we can still get greasy chip butties everything is golden. Gallons of Magnet will, admittedly, probably have to wait for a bit.

Southampton
Settling anything based on an incomplete season is clearly sub-optimal. But we must try to make the best of things. If titles and European spots and such are going to be handed out based on only part of a season, then there is no reason why it should necessarily be based on all of that part-season. Makes more sense surely to single out the toughest section of the season, the part that really tests squads to the max, reveals character and sorts the men from the boys. Obviously, this is the Festive Period where The Games Come Thick and Fast. For this season, the relevant and decisive period should cover Saturday 21 December 2019 to Saturday 11 January 2020 inclusive.

Tottenham
An uncompleted season is no kind of season at all. There is quite simply no alternative other than to void the entire thing altogether and forget it ever happened. Any and all managerial changes made during the course of a season that never happened would also, of course, be null and void. How could a managerial change happen if the season didn’t? Doesn’t make any sense. This ruling would, however, not apply to any loan signings that have been made permanent during this time. In the absence of any 2019/20 season at all, European qualification to be decided based on the most recent completed season.

Watford
We twatted the runaway leaders to scupper their unbeaten season and our manager is currently doing a better job of holding the government’s feet to the fire than Her Majesty’s Official Opposition or the media. Settle it all however you want, but we definitely deserve something, you ungrateful pricks.

West Ham
No relegation, obviously. Wouldn’t be fair. No way. Also, the British taxpayer has had it far too easy for far too long. Looking out for those less fortunate than ourselves will be crucial if we are to get through these current troubles so it seems only right for said taxpayer to reimburse those put-upon, struggling Premier League clubs who have very large stadiums in order to cover lost match-day revenue.

Wolves
Everyone knows that there is no greater challenge in football than the Thursday-Sunday pain-in-the-arse treadmill required of Europa League teams. The fairest way to sort this mess out is therefore to simply use everyone’s current points tally and then compensate those Thursday night stalwarts with an additional, say, three points for every Europa League game (including, and we can’t stress this enough, qualifying rounds).