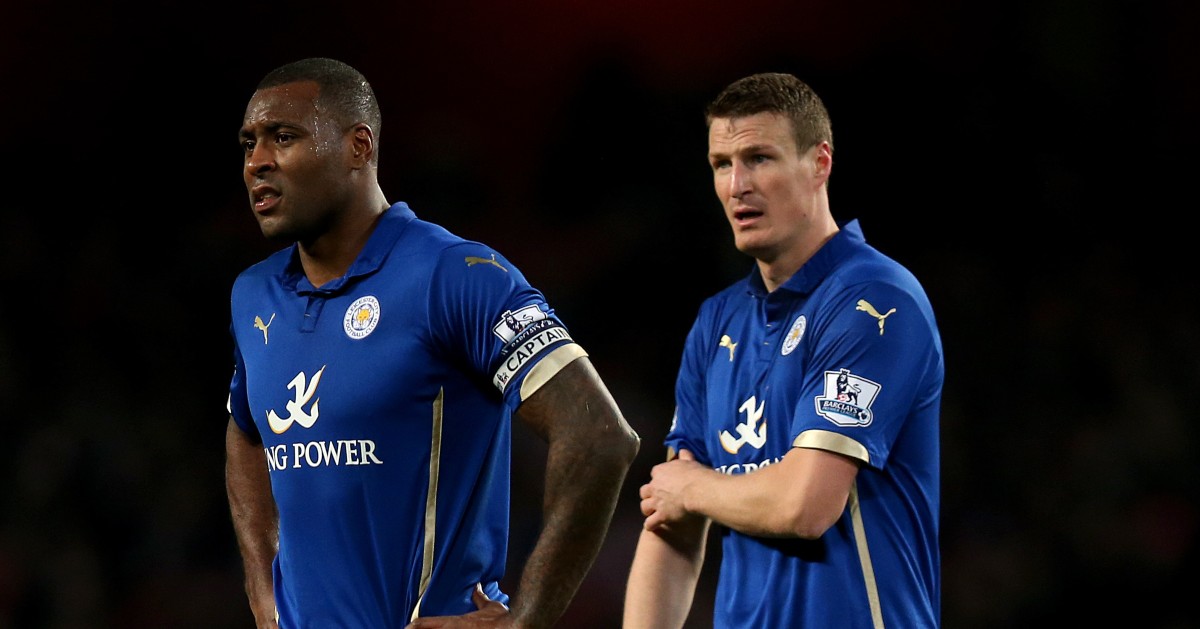 Liverpool centre-half Nathaniel Phillips has joined the pantheon of blue-collar workers at the back who would rather lump it than play it.

Out of the squintillion different centre-back partnerships at Liverpool this season, who would have thought that the ‘the sh*t brickhouse’ (Bolton Dictionary) Nat Phillips would have come to the rescue alongside Rhys Williams?

In the week that Wes Morgan announced his retirement, here’s a tribute to the joy of those blue-collar workers at the back who don’t give a damn about a cultured left foot. Launch it!

Wes Morgan
The not inconsiderable frame of Wes Morgan got onto the pitch in the closing stages of the FA Cup final last Saturday. In a game of fitness freaks you worried for him a little bit, especially when his rudder wasn’t able to quite turn fast enough to keep the ball out of the net for Chelsea’s disallowed equaliser. In that moment, Morgan’s farewell cameo seemed like the worst idea Brendan Rodgers had come up with since that ‘whose name in the envelope’ thing at Liverpool.

On the pitch, Morgan was certainly The Equaliser. His job was simple: keep the ball out of the danger zone. Smash it. Block it. Head it. The need for speed was unnecessary when two roadblocks were in the way. See Huth, Robert. The 37-year-old was out of contract at the end of the season. He knew the time was ripe. Salute Sir Wes, the Henry VIII of Premier League-winning King Power.

Robert Huth
Where there’s a Morgan, there’s a Huth. “He’s just a tank, no-nonsense,” said Jamie Vardy of the German destroyer. When he signed for Leicester, Huth was an injury-prone fifth-choice centre-back at Stoke, having been under the total football rule of Tony Pulis and Mark Hughes. Anti-football can bring glorious results.

If there was a German Terry Butcher, then this was the guy in the trenches. Huth once told the Stoke physio that he didn’t have time to bleed, such was his commitment to the cause of the common good. Or bad. As Troy Deeney said in 2016: “He is horrible to play against, in the most complimentary way. He heads it, he kicks it, and he kicks you – anything – he does not care, as long as the ball does not go in.” You cannot say unfairer than that.

Phil Jones
There’s always been a laugh and a half thrown at Phil Jones’ face – literally. To be fair, the infamous heading of the ball on the ground is a very difficult image to get out of one’s mind. Disturbing. BBC’s chief football writer Phil McNulty even suggested he’s ‘a danger to himself and others’.

There were such high hopes. After Manchester United won the last of their Premier League titles back in 2013, Sir Alex Ferguson said of the youngster: “At 21 years of age, he is going to be a phenomenal player. I think he can play anywhere on the pitch. He has such a massive influence, with his instinct and reading of the game. I think Jones may be one of the best players we have ever had, no matter where we play him.” That’s a hell of a build-up.

Jones was/is a good, honest option, but he always has a Dejan Lovren-style mistake in the locker. Think of him chasing Eden Hazard in the 2018 FA Cup final. Eurgh. Ole Gunnar Solskjaer has described Jones as a “solid citizen” and “one of those you can trust”. That’s not a bad tribute. It’s just not what Fergie envisaged.

Shane Duffy
The Irishman has been around the block and all of it has been on the mean streets. His heading and blocking stats have often been stratospheric. This is a stopper who likes to do all the dirty washing in public.

Duffy had a torrid time at Celtic for his lack of mobility and pace, but even then he was easily the league’s most dominant player in terms of aerial duels. When Brighton were flourishing under Chris Hughton three years ago in the top half of the table, he got a big thumbs up from Jamie Carragher: “There’s nothing better for me in the role that I played to see defenders defend like this, and want to defend. Doing everything they can to stop that ball going into the back of the net.”

On one occasion, Duffy even managed to score two own goals in the same game for Blackburn. Truly, a man after Carra’s heart.

Gary Cahill
The Crystal Palace stalwart would go down with any ship in the Atlantic and still bob back up without a life jacket. Think Cahill, think throwing the body at the ball from all positions in the name of keeping it out. He’s the goalkeeper of the defence. Ask Steven Gerrard. The former Chelsea man was never a thoroughbred, more like a useful stable horse to the John Terry stallion. At 35, he’s out of contract at Crystal Palace, but still plays as if the ball is the most dangerous thing since that meteorite landed on earth the other week. Cahill is one of those that just seems to enjoy the pain of the process. Can he have one last hurrah over Liverpool on Sunday?

Phil Jagielka
Jagielka is still throwing his body in front of danger at the ripe old age of 38. If you think James Milner is a useful utility player, then think again. ‘Jags’ was a dynamic midfielder in his first stint at Sheffield United and a decent backup keeper in his time.

Unfortunately, he hasn’t got the legs to run anymore as his lunge at Anwar El Ghazi in March proved. Still, there was no hesitation from Chris Wilder in bringing him back to Bramall Lane: “He’s a great example. Even though I joke about modern-day footballers, I have a whole group of players who are like that, willing to be selfless and put themselves on the line.” The former Everton man is as honest as the day is long. “If you look at his (Wilder’s) ideas, unfortunately for me, he likes to play overlapping centre-halves. Just normal centre-halves will do!”

Martin Skrtel
Perhaps he does not deserve to be here, but Martin Skrtel makes it because he embodied mass destruction at Liverpool. There are many images that come to mind. Head bandaged and battered, his 97th-minute header against Arsenal is one. How about having the temerity to punch the ball away from the penalty box in the last minute against Manchester City (and getting away with it) as Liverpool went on a title charge in 2014? Proper shithousery. The endless shirt tugs and constant pulling on the shirt of centre-forwards. The seven own goals. The Nat Phillips-style efforts in the mixer at the right end. Skrtel and Phillips. What an image. Truly terrifying.