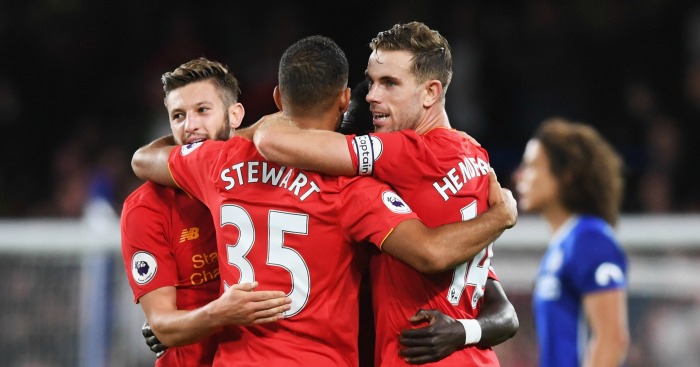 Theo Walcott (Arsenal) – Five goals already this season (it took him until almost Christmas to reach that mark last season) and more tackles than in his last two campaigns combined. Something happened to Walcott this summer – maybe turning 27 just before missing out on another major tournament made him realise that he needed to a) work harder and b) accept he could be a very good winger rather than battling to be an average striker. He made Sam Allardyce’s first/last/only squad and should retain his place for Gareth Southgate.

Adam Lallana (Liverpool) –  Playing in a slightly withdrawn role to make room for the Sadio Mane/Roberto Firmino/Philippe Coutinho triptych and it suits his hard-running style. He already has three Premier League goals to his name in Liverpool’s ridiculously entertaining season; he reached that total in March last season after losing his way under Brendan Rodgers. We are already predicting a Henderson-Lallana-Alli midfield for Malta. Get off their toes, Wayne.

Jordan Henderson (Liverpool) – Playing in a very withdrawn role to make room for Lallana making room for the Sadio Mane/Roberto Firmino/Philippe Coutinho triptych and he has adapted extremely well. He is passing the ball more than anybody in the Premier League and only the Idrissa Gueye machine is tackling more. Finally he looks like a leader, finally it looks like Liverpool fans might warm to their captain. Now let’s see it transferred to England, Jordan.

Raheem Sterling (Manchester City) – We will defer to our friend Adam Bate at Sky Sports for greater detail on the rejuvenation of Sterling, but basically he looks sodding amazing. “He’s being coached,” says Brendan Rodgers and for once, he wasn’t talking absolute bollocks. There was a confidence-rebuilding job to do with Sterling but also a reminder that he is a winger and he should play as a winger until the minute he gets near the box: then he’s a striker. His finish against Swansea was cool, smooth and unerring. What price a Rooney/Rashford/Sterling front three against Malta?

Michael Keane (Burnley) – If you believe all you read (and you really shouldn’t) then Chelsea manager Antonio Conte wants to make Keane the new John Terry. Presumably without all the unpleasantness. For now Keane is doing a fine job of giving Burnley a fighting chance of survival, with the Clarets conceding fewer goals than any other team in the bottom half of the table. His 16 England Under-21 caps makes us think that Southgate might well see him as a rather more exciting alternative to the bizarrely recalled Phil Jagielka.

Michail Antonio (West Ham) – He made us laugh rather a lot on Wednesday by saying that at least Allardyce was leaving England with a 100% win record, which is nice because there’s been precious little laughter at West Ham this season. The one silver lining has been the wonderful heading ability of Antonio, who has scored five of the Hammers’ seven Premier League goals. All with his head. As Dimitri Payet has lost his shooting boots and Simone Zaza forgot to pack his, Antonio is at least in full possession of his bonce.

Jason Puncheon (Crystal Palace) – Playing for his boyhood club as they sit pretty in seventh place and right now he is creating more chances than Mesut Ozil, Kevin De Bruyne, Roberto Firmino or anybody else in the Premier League…how could life get any better? Well, he could get an England call-up. Imagine the tears. Sorry but if you don’t have at least a little bit of love for Jason Puncheon then I am afraid that we cannot be friends.