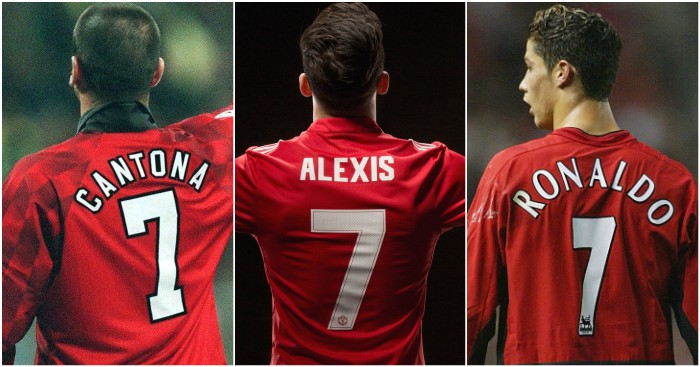 Alexis Sanchez will take the number seven shirt at Manchester United after completing his move from the Arsenal on Monday.

The former Arsenal attacker spoke of his delight at joining’ the biggest club in the world’. Now the hard work starts to live up to his star billing in the No.7 jersey.

Here are some of the previous stars whose success the Chilean will be hoping to emulate, rather than the last four wearers – Michael Owen, Antonio Valencia-lite, Angel Di Maria and Memphis Depay.

Johnny Berry (1951-58)
Berry was one of the Busby Babes who was forced to retire due to injuries he sustained in the Munich air disaster. However, he did manage to win three league titles during his eight years at the club and was regarded as one of the best young players in Britain.

George Best (1963-74)
Not exclusively a number seven. Indeed, Best probably wore number 11 more often. However, on the greatest night of his footballing life, when United defeated Benfica in the 1968 European Cup final at Wembley, he was wearing the seven shirt. He also won two Division One titles with United.

Steve Coppell (1975-83)
He may not quite have the profile of some of the others to wear the shirt but Coppell kept the number seven for six years on his arrival at United. He wore it in three FA Cup finals, including the 1977 victory over Liverpool.

Bryan Robson (1981-94)
Coppell switched when Robson made his British record move from West Brom in 1981. The inspirational midfielder became the first player to captain three FA Cup-winning teams, also led United to the 1991 European Cup Winners’ Cup, and the League Cup before getting his hands on the first Premier League title in 1993.

Eric Cantona (1992-97)
When the Premier League made squad numbers mandatory at the start of the 1993-94 campaign, Cantona was handed the shirt. The Frenchman had already earned himself a place in United folklore and went on to win four titles and two FA Cups, scoring the winner against Liverpool in the 1996 final, when he had also been named captain.

Cristiano Ronaldo (2003-09)
Beckham’s profile meant there was always going to be a spotlight on who inherited the shirt and Ronaldo proved to be the perfect successor in more ways than one. During a six-year stint in which he won three league titles he was also crowned World Player of the Year in 2008 for his phenomenal 42-goal contribution to a campaign in which United also won the Champions League.