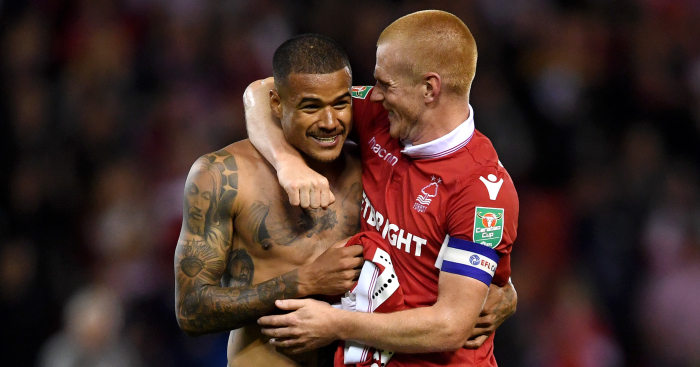 Kenedy (Newcastle United)
Speak to any Newcastle United supporter and they will tell you that, behind Rafa Benitez, Kenedy was the biggest reason for their surprise top-half finish last season. His arrival in January gave the whole club a lift, a player with the confidence to take on a man and the energy to sprint up and down the left wing. The season-long loan deal confirmation was the highlight of Newcastle’s summer.

Things haven’t started well. Kenedy was abysmal against Cardiff City, culminating in a missed penalty with virtually the last kick of the game, and was given a second chance against Nottingham Forest on Wednesday night. Not only was he frustrated throughout, he tried to dribble the ball out of defence and was tackled 25 yards from goal for Forest’s third. Benitez can ill-afford the Brazilian to be dragged down by those around him.

Yoshinori Muto (Newcastle United)
Signed with no great fanfare from Mainz, Muto looks like too many of Newcastle’s players: Too often too quiet in too many matches. As the Newcastle Chronicle wrote after the game, ‘Didn’t have any real impact. One blocked shot and a penalty shout. Hauled off before the end.’ That just about sums it up perfectly.

Lucas Perez (West Ham)
In Winners and Losers, I underlined the Hammers’ worrying over-reliance on Marko Arnautovic, with no other striker scoring a goal in the Premier League since mid-April. So step forward Lucas Perez, given the chance against League One opposition at Wimbledon. And he was bloody awful. Like really bloody awful.

To be fair, he was not alone as Javier Hernandez and Pedro Obiang were also way off the pace for the Hammers despite their 3-1 win against the Dons, but it was Perez’s performance that will leave fans wondering if the £4m bargain signing from Arsenal cost them approximately £3.5m too much.

No wonder Lucas Perez was so cheap he is absolutely Pony.

Alireza Jahanbakhsh (Brighton)
It’s not that the Iranian international winger was awful, but when you break your transfer record for a man who top-scored in the Eredivisie last season, then you expect a little more against Southampton’s reserves. He was often wasteful or caught in possession, though that could be a result of him trying a little too hard to force his way into this Brighton side after being restricted to a couple of cameos in the Premier League.

Striker Jurgen Locadia also struggled, leaving Chris Hughton to admit: “It was always going to be that one moment that changed things, and unfortunately it came for them.” He surely spent all that money on Jahanbakhsh for exactly such moments.

Key points of tonight’s game:
– Locadia looked stacked; didn’t do much tho
– Jahanbakhsh didn’t quite live up to expectations but had a good couple of runs/touch’s
– The U23 lads looked good
– Played relatively well against a near full strength S’ton squad#BHAFC #Southampton

Manolo Gabbiadini (Southampton)
“Gabbiadini struggled to a certain extent,” admitted Mark Hughes after a 1-0 win over Brighton that featured a goal from the man who replaced the Italian. Hughes has admitted that Southampton struggle to service the striker but clearly he was left wanting more at the AMEX, saying: “Maybe at times we’re guilty of not giving him the service he wants but on other occasions he knows what he has to do as well as he can when he gets opportunities and he mustn’t let opportunities pass him by.”

Unfortunately, three days after he was left out of the Saints squad for their defeat to Leicester City, Gabbiadini squandered his Carabao Cup opportunity. Though he still has some Saints fans on his side…

Austin out – correct move. Long in? Hmm 🤔 Him ahead of Gabbiadini is absolutely criminal #saintsfc

Loic Damour (Cardiff City)
We could have pretty much picked any Cardiff City player – Neil Warnock said after the game that not one player had made a case to start in the Premier League this weekend – but we have settled on Loic Damour, a former French youth international who should really have been left behind in the Championship. His job was to shield the Bluebirds’ defence against Norwich but he was basically a liability. This is going to be a long old season for Cardiff…

We established that Connolly, Richards, Peltier, Harris, Damour should never play in the Premier League. We have no strikers. Manga had to defend single handedly. We will struggle without Hoilett and Mendez.

Juninho Bacuna (Huddersfield Town)
We will just leave this here…

The greatest own goal you will see this year, courtesy of Huddersfield Town's Juninho Bacuna. pic.twitter.com/poVzHOG4cB

Glenn Hoddle: If we’d beaten Argentina, we could have won WC98 (Planet Football)