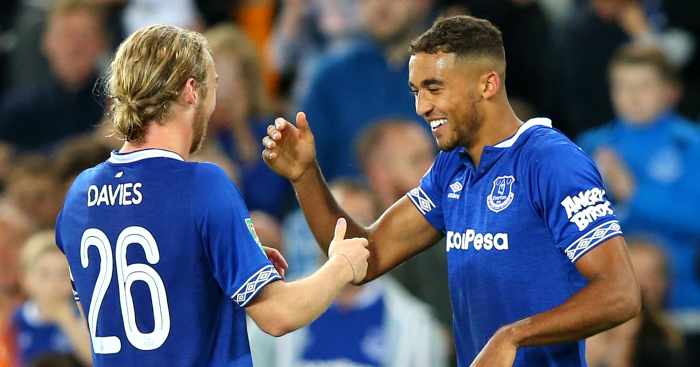 Dominic Calvert-Lewin (Everton)
Calvert-Lewin was in danger of becoming Everton’s forgotten man. He started 16 league games before the turn of the year last season, but just two more from then on as Sam Allardyce opted for experience over youth. So far this season, the forward has managed 21 minutes in two matches and has Richarlison in front of him in the wide left forward queue.

Still, the only way to improve your chances is by working hard, staying quiet and taking your chances when they come along. Scoring twice against Championship opposition on your first start of the season – one of them a beautiful curled finish – will remind Marco Silva that he has strength in depth. With Richarlison suspended, does he start at the weekend?

Ben Wilmot (Watford)
Signed with at least one eye on the future in the summer, Wilmot is still only 18 and played most of his football at Stevenage as a central defender. But since joining Watford, the club’s coaches have been convinced that Wilmot could have a future as a holding midfielder. It was in that position he was picked against Reading.

‘Operated as a quarter back throughout and looked a very assured presence in front of the back four,’ wrote Football.London’s Watford correspondent. ‘Despite his young age, he confidently looked for the ball at every opportunity.’ What more can you ask from a young player making his competitive debut for a Premier League team?

Rachid Ghezzal (Leicester City)
If he wants to be known simply as Rachid Ghezzal rather than ‘the new Riyad Mahrez’ then he absolutely should not have cut in from the right and lashed home an absolute belter of a goal during Leicester’s 4-0 win over Fleetwood. He is just making a rod for his own back by being a ‘real threat’ (as testified by the local paper) against Joey Barton’s men.

It was a night of encouraging performances from Leicester, though Vicente Iborra and Adrien Silva may have to impress against better opposition before they usurp either Wilfred Ndidi or (like a) new signing Nampalys Mendy. But the tricky Ghezzal might well have done enough to at least shift Ricardo Pereira into defence.

Adama Traore (Wolves)
He signed for a club-record fee but he is being eased into this impressive Wolves side. On Tuesday night at Sheffield Wednesday he demanded to be fast-tracked with a phenomenal performance marked by an assist. The former Barcelona, Aston Villa and Middlesbrough man ‘was electrifying and had Wednesday on toast’, according to the Birmingham Mail.

Max Meyer (Crystal Palace)
Crystal Palace fans will be very happy for Alexander Sorloth that he scored his first goal for the club, but they will be even happier for themselves that they have somehow got a 22-year-old German international midfielder at their lovely club. Against Swansea he was excellent, and will surely start against Southampton on Saturday. Certainly, nobody but Jeffrey Schlupp and possibly the Southampton defence would shed any tears at that particular personnel change.

Max Meyer is one of those players who looks way too good for their club. His ability on the ball is top drawer, his ball retention, his vision, his passing and dribbling. You could stick him in that Manchester City team and he wouldn't look out of place. Seriously.

Jefferson Lerma (Bournemouth)
Such is the squad strength at Bournemouth now that they can make a raft of changes for a Carabao Cup tie against MK Dons and still field this team: Boruc; Francis, Mings, Simpson, Rico; Ibe, Cook, Lerma, Fraser; Mousset, Defoe.

In truth, it was a cruise for the Cherries but Eddie Howe was very happy indeed with new signings Jefferson Lerma and Diego Rico, saying they “both acquitted themselves really well”. Lerma cost the Cherries a club-record £25m so it is surely a matter of time before both him and England international Cook replace Dan Gosling and Andrew Surman.

Alfie Mawson (Fulham)
It was Aboubakar Kamara who made the headlines with a brace, but the real positive for Fulham as they cruised against Exeter was the performance of centre-half Alfie Mawson, who has missed the start of the season with a knee injury. He made his debut on Tuesday night and was as imperious as you would expect against lowly opposition, reunited with his old England Under-21 central defensive partner Calum Chambers.

“He showed quality, he showed experience,” said coach Slavisa Jokanovic. “We are happy how he adapted himself with us. He showed he’s strong, he’s solid in the air. He knows how to play football, and he is going to be a good addition for us. I have three days more to think about my team and choose what I think is the best option for us when fighting for the points against Brighton.”

Best defender we have by miles, he'll be key for us I reckon