Home Arsenal Seven players we are surprised have started every game 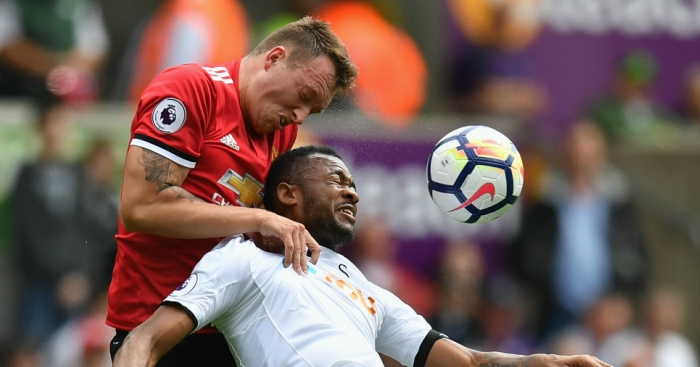 Phil Jones (Manchester United)
There was a stage last season when Phil Jones and Chris Smalling were equals. They were equal in terms of Premier League games, with 18 apiece, equal in terms of their positions as central defensive back-ups to Eric Bailly, Marcos Rojo and whomever Manchester United would sign in the summer, and they posed an equal threat to both themselves and each other in training.

Jones’ uncertain position as a squad player and little more at Old Trafford was illustrated before the start of the season. When examining the first and second XIs each of the top six, we could find no place in either United side for a player more revered for his silly faces and limited vocabulary than for his actual defending.

Perhaps it has been a rare run of full fitness, Victor Lindelof’s unexpectedly difficult start to life in Manchester or Rojo’s prolonged spell on the sidelines. Maybe simply outperforming Smalling in training has changed his fortunes. But few would have expected Jones to have started each of United’s first three games of the season, as well as England’s three most recent fixtures.

“If we manage to have him safe and protected from injuries, I think potentially he’s everything I like in a central defender,” Jose Mourinho said of the 25-year-old last month. The question has only ever been one of fitness, and for now, an emphatic answer is being provided.

Danny Welbeck (Arsenal)
Like the partner who gives you a slightly smaller portion for dinner because you’ve had an indulgent Christmas, Arsenal fans were hardly subtle in their message to Arsene Wenger. The voting for the club’s August Player of the Month finished with a top three consisting of their only two summer signings, as well as a keeper who had conceded eight goals in three games. The message was loud and clear.

Sead Kolasinac was crowned shiniest sh*t of the month, having spent the majority of the club’s 4-0 defeat to Liverpool sharing space on the bench alongside another new arrival. Alexandre Lacazette was signed for a club-record fee in the summer, yet was also dropped for the biggest game of the season so far.

Arsenal would perhaps still have lost at Anfield had Lacazette played alongside Alexis Sanchez and Mesut Ozil, but the performance would surely not have been as catastrophic. The decision to start Danny Welbeck in his stead looks more foolish and ill-advised by the day.

Wayne Rooney (Everton)
“He is that teacher for young players,” said Ronald Koeman of Wayne Rooney last month. The Everton manager will be sure to thank the striker for his latest lesson in precisely how one absolutely should behave themselves during an international break.

In that same August interview before the events of this past week unfolded, Koeman spoke of how Rooney is “important for his team mates to show them what you need to do to reach that high standard of football,” but also “an important player on the pitch”. It always felt as though the first point was the most salient – that the 31-year-old would be as much an expensive mascot for Everton’s new era as he would be a regular starter.

So it has not proved. Three outfielders have played every minute of Everton’s Premier and Europa League campaigns thus far, with Rooney joining Leighton Baines and Michael Keane as an ever-present. As the scorer of their only two league goals thus far, there can be few complaints, but Koeman’s desperation to sign a striker this summer suggests it was never the plan.

Written at a time when Manchester City were being linked with Virgil van Dijk, Leonardo Bonucci and Marquinhos, it did feel as though Otamendi’s time in the starting line-up was coming to an end. Numerous livestock had been sacrificed for Vincent Kompany to return to full fitness, John Stones was still being lauded as the future leader of the free world, and the new arrival would fill the final slot in a three-man central defence.

Even with changed circumstances – Pep Guardiola altering his system to a back four against Bournemouth – Otamendi was unmoved; Stones was the fall guy. The England international has some way to displace Otamendi, who has perhaps fewer supporters in the fanbase and the media, but has the crucial backing of the manager.

Timothy Fosu-Mensah (Crystal Palace)
If the consensus is that Crystal Palace should have signed more than four players this summer to help Frank de Boer transition from the old playing style and establish a new one, a thought should be spared for one of those who did arrive in the summer.

Of the eight players to have started all three of Palace’s games so far, only one is under the age of 26, only one is a loanee, and only one has as few as six top-flight career league starts to their name. Timothy Fosu-Mensah is the young supply teacher being asked to lead a school’s new curriculum with precious little guidance.

To the 19-year-old’s credit, he is in the ever-dwindling minority of players who deserve to have escaped censure at Selhurst Park. The 19-year-old has performed admirably in testing circumstances at Palace, but a young loan player outperforming his teammates illustrates just how tough a task the struggling De Boer faces.