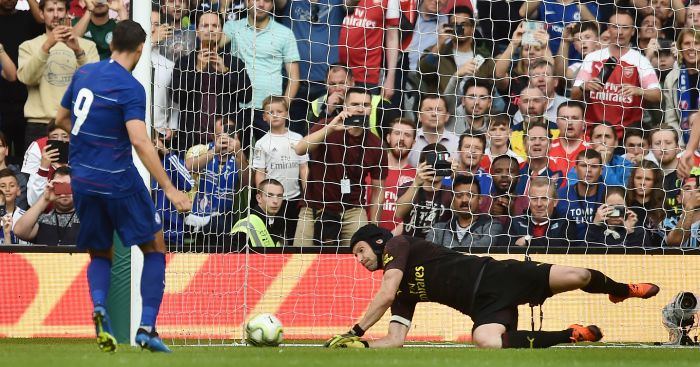 Bloody hell, the new Premier League season is only a week away. How on earth has this happened? Here are the players who for assorted reasons need to make a fast start to the new campaign…

Mesut Ozil (Arsenal)
Has spent the last month as scapegoat-in-chief for Germany’s disastrous World Cup. It’s been an ugly spectacle, culminating in his international retirement at just 29. His impassioned 2000-word-plus statement hit out at the “racism and disrespect” he suffered as a string of high-profile German football figures queued up to join the kicking.

But Ozil’s pain and Germany’s loss could very much be Arsenal’s gain. Pre-season evidence suggests Ozil is front and centre in Unai Emery’s new vision for the club. Ozil can be maddeningly inconsistent, but the numbers are there. Nobody has created more chances or provided more assists in the Premier League since his move here. A swift return to his very best form for Arsenal would go a long way to putting a dreadful, draining summer behind him.

Alvaro Morata (Chelsea)
After Eden Hazard topped Chelsea’s Premier League goal-scoring chart with a measly 12 last season, Chelsea still find themselves inexplicably minus a reliable goalscorer. Which may mean an unexpected second chance for Morata. A hat-trick against Stoke took him to six goals in his first six Premier League games after joining from Real Madrid, but he failed to double that tally in his remaining league games.

He and Chelsea need some more of that six in six action (but perhaps less of the five in 26 to follow), but the signs are not good. After missing out on World Cup selection with Spain, Morata had a full pre-season but his lack of confidence in front of goal reached a nadir in the recent friendly against Arsenal with a host of missed chances including a first-half penalty. “I am not worried about Morata,” said Maurizio Sarri afterwards like some real-life version of the ‘This is fine’ meme.

Eric Dier (Tottenham)
Plenty on this list need fast starts for their own purposes. With Dier, it’s very much his team that desperately needs him to hit the ground running. Victor Wanyama is injured. Mousa Dembele has been looking for a move, uncertain his body can stand up to the rigours of another gruelling Premier League season. Harry Winks is… well who the hell knows.

There have been some enormously encouraging pre-season friendly performances from Tottenham’s batch of talented youngsters, but the bald truth is that, with a week until the start of the season and less than that until the transfer window shuts, Tottenham’s senior central midfield options currently begin and end with Dier.

Paul Pogba (Manchester United)
This is probably outrageously harsh given he’s still being told to stop messing about and get his hair cut and just focus on his football even though he’s literally just won the World Cup with the most sensible haircut imaginable. It suggests that there really isn’t much he can do to silence his critics, but it would be absolutely lovely to see a bit more of the Pogba that dazzled in Russia when he returns to Manchester United duty this month.

Sympathy for Manchester United fans is understandably and correctly in short supply among other supporters, but lord knows the poor mites could do with a lift right now with Buzz Killington in charge of the club. Pogba is just the man to provide it.

Alisson (Liverpool)
Because when you spend that amount of money on a goalkeeper to replace your existing gaffe-prone options, a couple of early gaffes can set a deeply worrying tone. The fixture computer has handed Liverpool a friendly start to what really ought to be a concerted title charge this season, with West Ham, Crystal Palace, Brighton and Leicester on the menu before a trip to Tottenham’s new stadium. If we assume the attacking side of things is going to take care of itself, then a strong start from Alisson could well see Tottenham opening their new ground against the early league leaders.

Harry Kane (Tottenham)
And by ‘fast start’ here we mean ‘score a goal in August’. It’s weirding us out that you haven’t done it yet. Just score a goal. Any goal. Apart from a penalty, or a fluke, or one from inside the six-yard box, because people will say they don’t really count. And lord help you if it’s only a tiny deflection you get on the ball.

Richarlison (Everton)
Marco Silva has invested an awful lot – not just financially – in his reunion with Richarlison at Goodison. The Brazilian was dazzling in the early stages of last season after his move to Watford, and something similar is needed now both have moved up in the world. The top six is a realistic target for Everton, but only with a decent start and that means the new boy hitting the ground running.