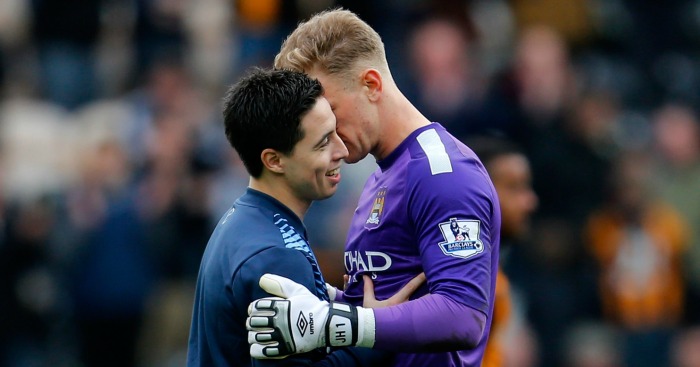 Joe Hart (Premier League champion, 2011/12 and 2013/14)
While City stalwarts Pablo Zabaleta, Aleksandar Kolarov, Vincent Kompany, Yaya Toure, David Silva and Sergio Aguero still have at least one more season at the Etihad under Pep Guardiola, Joe Hart looks set to join a long list of Manchester City’s first Premier League title winners in being deemed surplus to requirements. It’s time for an upgrade and Claudio Bravo is definitely an upgrade on the pumped-up letdown that was Hart at Euro 2016.

Despite all the wailing and gnashing of teeth (one Telegraph writer said he was being ‘imprisoned’ by Pep Guardiola) in the English media, it’s telling that mid-table Serie A side Torino appear to be Hart’s best option after a very public and very embarrassing audition for a move this summer in France. It might do him good to have a humble year in Turin.

Cesc Fabregas (Premier League champion, 2014/15)
Remember all those years ago (two) when Fabregas formed a phenomenal partnership with Nemanja Matic as Chelsea cruised to the title? Remember that golden period (two years ago) when the Spaniard notched 18 Premier League assists in one season? Well, now – with Fabregas in his dotage – we have reached the point where he has played just 12 minutes of Chelsea’s opening three Premier League games of the season, with new manager Antonio Conte preferring the dynamism of N’Golo Kante and Matic to his lazy stylings.

“Contrary to what has been written, the manager and I have a good relationship and he has NEVER told me that I can leave,” says Fabregas, but recent reports in Spain suggest that Real Madrid have been offered Fabregas (and turned him down). And with Marcelo Brozovic in Chelsea’s sights, Fabregas will only move further down the pecking order. Slowly.

Gokhan Inler (Premier League champion, 2015/16)
Just a few months after being part of Leicester’s Premier League title celebrations, Inler is without a squad number and eyeing an escape, probably to Besiktas. Last seen playing for Leicester’s Under-23 side alongside Matty James and Tom Lawrence earlier this month, the former Swiss international captain desperately needs a transfer just over 12 months since his arrival at the Foxes as the ‘new Esteban Cambiasso’ was far more heralded than the signing of some little fellow called N’Golo Kante.

Inler started just three Premier League games last season and won a title but lost his place in the Swiss national side for Euro 2016 so it’s fair to say that it has been a mixed old year for a player with 89 international caps.

Juan Cuadrado (Premier League champion, 2014/15)
“Next season, I believe he can have a fantastic season,” said Jose Mourinho in April 2015 after fans turned on the Colombian after a particularly awful cameo against Southampton. The £26m January signing from Fiorentina was supposed to be the final piece in Chelsea’s title march but his four starts that season were a) underwhelming and b) superfluous. Mourinho promised he would improve but patience ran out in August 2015 as he sent him on loan to Juventus.

This time he thoroughly deserved his title winner’s medal as Juventus marched to Serie A glory with performances keenly watched by Italy coach and incoming Chelsea manager Conte, who said in July: “Cuadrado is a Chelsea player and I hope he remains one.” As August ticks down again and Cuadrado is yet to make an appearance for Chelsea, another season at Juventus surely beckons. Nobody at Stamford Bridge will miss him; especially not Victor Moses.

Samir Nasri (Premier League champion, 2011/12 and 2013/14)
“If I stay working with Pep Guardiola if he wants me, he’s just going to be a lucky man because I will be really hungry,” said Samir Nasri in April on his return from injury. It turns out he was more ravenous than merely hungry because he came back to Manchester City after a summer of fun with a few too many inches around the middle. After not being involved in City’s first four games of the season, the newly slender Nasri played 15 impressive minutes against West Ham on Sunday.

Does that mean Nasri is no longer for sale? Not a bit of it. “Yes, there could still be movement,” he said. “It depends on a lot of things in fact. There’s been a lot of speculation. Things that are true. Things that are false too because they’ve never shown me the door or anything like that. But I said ‘everything depends on what’s up there [in your head] and your desire’. So we’ll see.”

We understand. Ish. But what’s important right now is that Pep Guardiola may simply have no room for Nasri in his squad. Like us, you have probably forgotten that they have signed Leroy Sane and Gabriel Jesus for a combined £64m.

Loic Remy (Premier League champion, 2014/15)
Unlike bandwagon-jumper Cuadrado, Loic Remy really did contribute to Chelsea’s title triumph with seven Premier League goals in a season that saw him make just eight starts. Remy was a very useful man to have around during a season when Diego Costa suffered a series of self-inflicted suspensions and unfortunate injuries. But last season – as Chelsea got worse and things got ever more desperate – Remy was cast aside and there was some surprise when he was still at the club at the end of the January window.

But now here we are in August and Remy is well behind Costa and Michy Batshuayi in the Chelsea pecking order and set for a loan move to Crystal Palace to link up once again with his old Newcastle manager Alan Pardew.

Mario Balotelli (Premier League champion, 2011/12)
Oh Mario. The Premier League title he won with Manchester City was his fourth championship triumph after three Serie A medals with Inter Milan; he was surely one of the most successful 21-year-olds in the history of football. Since that title triumph he has scored a grand total of 29 league goals in four seasons, with just two coming in his last two campaigns with Liverpool and then AC Milan.

“We want him to become the player he was before his injury – the talent is still there, there’s no doubt about it. When we have done the crossing, heading and stuff he’s been world class,” said Liverpool boss Jurgen Klopp in mid-July as he confirmed that he was very much available for transfer. Now here we are on August 30 and we are still waiting for Palermo (or Nice, or anyone) to take the plunge.

He is going out in style though…