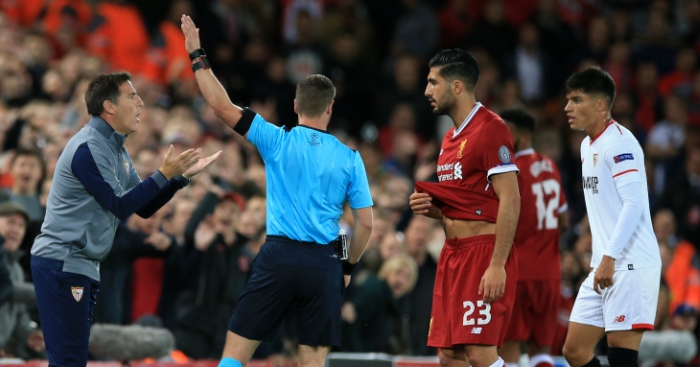 Sevilla manager Eduardo Berizzo has offered a wonderful explanation for his red card against Liverpool.

Berizzo was sent to the stands during Wednesday’s 2-2 draw at Anfield after throwing the ball away.

The Sevilla coach admitted his sending-off was all his own fault, and not that of Jurgen Klopp.

“When we were winning and Liverpool were on the counter I did something that wasn’t right, I threw the ball to stop the advantage of a counter-attack. I realised that was a mistake,” he said of his first offence.

“However in the second half, when we were losing and chasing the game, I still decided to throw the ball away to make up for (my actions in) the first half so I tried to do the same.

“Klopp understood but the referee didn’t understand, he was the only one.

“I had a chat with Klopp and wanted to put right the initial mistake. He (the referee) did act to the letter of the law, but I wanted to try to explain.

“What I did explain to the Liverpool staff is that it wasn’t a bad intention, I was just trying to make up for what happened before.”