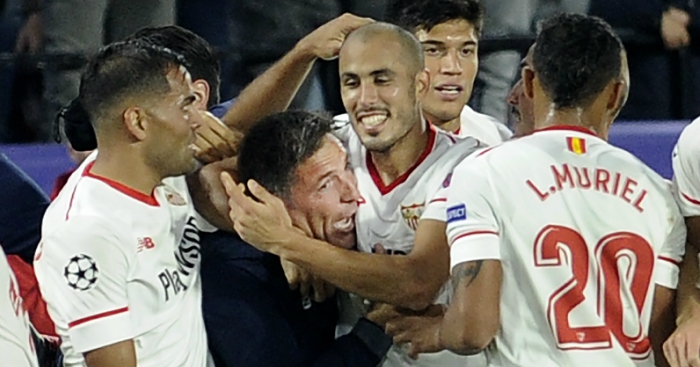 Eduardo Berizzo revealed his battle with prostate cancer at half-time of Sevilla’s comeback draw with Liverpool on Tuesday.

Sevilla came from 3-0 down at the break to draw 3-3 with the Reds, as Guido Pizarro netted in second-half stoppage-time to cancel out a brilliant visiting attack.

Spanish media reported in the aftermath of the victory that Berizzo had told his players that he was battling cancer at half-time.

According to Sevillainfo, Berizzo informed his players of the situation, and the hugs and celebrations on the pitch ‘revealed more than a long-suffering and epic draw’.

‘The players have thrown caste, courage and pride after a talk in the locker room, when the team, deflated, lost by zero goals to three at halftime,’ the report continues.

‘In that talk, the news that the Argentine coach [delivered] has moved his players and the entire structure of the Club. Berizzo suffers from prostate cancer.’

Sevilla officially announced on Wednesday morning that Berizzo had been diagnosed with cancer of the prostate, and that ‘future examinations’ will take place to decide the next steps for treatment.