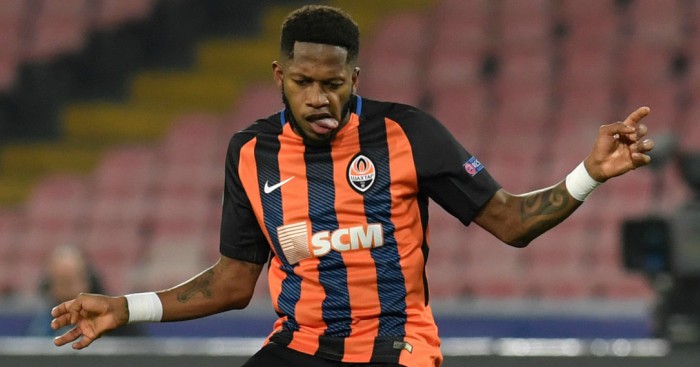 United are said to be closing in on a deal to sign the Brazil midfielder, who says he is leaving negotiations in the hands of his agents.

Manchester City were also interested in Fred, but Akhmetov says Shakhtar were able to turn down an offer in January from Pep Guardiola’s side worth around €10million less than the amount needed to buy the 25-year-old out of his contract with the Ukrainian club.

Half a season on, the Shakhtar chief expects to receive the full amount.

“We’ll get exactly the amount he costs,” Akhmetov told his club’s website. “We can’t get a dollar if the player costs 50 cents. We don’t want to sell him for 50 cents if the football player costs a dollar.

“This will be a market price, the fair price, and it will be beneficial both for the club inviting Fred and for us. That is, I can somewhat feel that Fred will be more expensive than Fernandinho and Teixeira.

“If Fred won Brazil caps and go to the World Cup, this indicates that Shakhtar has gathered a very strong and quality player. Why are they going? Because they know that they will come here, help us, create a name for themselves and tomorrow will be at the world’s best clubs.”

“You know that we had negotiations with Manchester City this winter. And there was an official offer – a very big figure.

“They offered us around €50m for Fred. And we had enough strength to reject it. Because we were playing in the Champions League, we were finishing the Ukrainian league campaign. We won the championship and the cup.

“In principle, our decision was correct and I am convinced that we will receive and are receiving no less interesting proposals than that from Manchester City.”