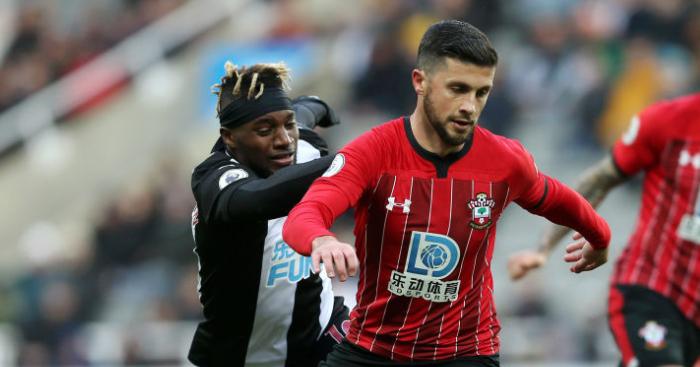 And now to the strikers on our Old Folks XI. The younger (by 11 days) was a title winner in his very first senior season, and scored his first Premier League goal at the age of 19. His first international goal came the following year, in the third of his 82 caps. He’s played in the Europa League three times and at the European Championships twice. He turned 33 a few weeks ago, and is enjoying an Indian summer at a club that’s played some pretty decent football lately. Over the years he’s made Irish eyes smile, and helped Saints go marching in. He even holds a Premier League record that’s unlikely ever to be broken. But how often have you thought about…

Shane Long is one of those players who perpetually lurks just beyond the edges of your consciousness. He’s the kind of whom we say “Oh, yeah. Forgot about him,” or “Is he still playing?” There’s almost nothing you can remember about his career, except that he seems to have had one.

To understand his place in the shadows, we have to begin at the beginning. He started out at Reading in 2005, and although the Royals rolled to the Championship title that year, they didn’t linger in the top flight. Long was too young to make his mark then, and though in his first Premier League season he once scored in back-to-back matches, overall in two years he logged only 17 starts and five goals.

So when in 2010/11 he finally had his breakthrough season, scoring 25 goals in all competitions, he was in the Championship and largely out of the spotlight. Nevertheless, he was named Reading’s Player of the Year, and despite a play-off final loss to Swansea City, he booked a second ticket to the Premier League, this time with West Bromwich Albion.

It’s now his ninth straight year in the league. But niggling injuries and competition from other strikers have always kept him short of significant achievement. The most starts he’s had in a Premier League season is 26 in 2013/14, and those were split between two clubs, since he was sold to Hull City mid-season. He stayed only six months, enough to take part in a surreal Europa League sojourn, then moved to St. Mary’s in the autumn. Since then, he’s only once managed to start at least half his side’s matches. He reached peak Shane in 2016/17, starting 10 times but subbed in a ridiculous 22.

His scoring numbers are similarly inconspicuous. Since he moved into the top flight for good, his seasonal goal totals are as follows: 8, 8, 7, 5, 10, 3, 2, 5. This year he has one. Assists are hardly worth mentioning, 22 in eight seasons plus. He played in the Europa League for Southampton too, but scored only one relatively unimportant goal in eight matches. He even missed their most notable result, a home win over Inter.

Let’s be fair, though; he’s scored some prominent club goals in his time. In 2010 he netted for Reading in extra time to knock Liverpool out of the FA Cup. He also got a brace for the Royals in the 2011 play-off semi-final against Cardiff City. And here’s his most famous tally, at Anfield no less, putting Southampton through to the 2017 League Cup final:

A month later the Saints nearly upset Manchester United at Wembley – but it’s typical of Long’s career that he played only seven minutes in the big match.

Looking over his whole record, then, Long has only taken centre stage for the briefest of moments. Most of the time he’s had a mild supporting role, or even been demoted to an extra. He’s just never been able to claim a lasting spot in our footballing memories.

The pattern has continued under Ralph Hasenhüttl. A forgotten man most of last season, Long scored four goals down the stretch as Southampton avoided the drop. Pretty good – but this season it was back to obscurity, playing only 154 minutes before December.

His career looked to be finally petering out, in appropriately muted fashion. Yet out of nowhere in the last two months he’s become a regular, partnering Danny Ings in Hasenhüttl’s 4-2-2-2. After starting only one of the side’s first 14 matches, he’s now started nine of the last 12, and it probably would have been 12 of 12 if he hadn’t been injured. What’s the deal?

For one thing, there isn’t anyone else. Che Adams has been a bust, Michael Obafemi is too raw and Nathan Redmond seems to be happier on the wing. But Long also has two very important virtues that suit him for a Hasenhüttl side.

The first is his work-rate. He’s always been the type to run after any ball, chase any cause, no matter how hopeless-looking. He’s a natural for the high press.

The second is his aerial prowess. Although under six feet, he has a prodigious vertical leap, and performs well as a target man. Hasenhüttl likes his keepers to launch the ball into the attacking half. So among players with at least 10 starts, Long is fourth in aerials won/90, behind much bigger men Oli McBurnie, Sébastien Haller and Troy Deeney.

Over the years his leap has been a pretty good goal-producer, too. Here’s a beauty for the Republic of Ireland against England, voted FAI’s International Goal of the Year in 2013:

That’s an appropriate segue to his international career, where the stats make for familiar reading. He’s appeared in six European Championship matches, 18 in Euro qualifying, and 16 in World Cup qualifying. He’s actually played more minutes in competitive fixtures than in friendlies. The inevitable ‘but’? Only five of his 17 goals have come in games that counted. He just can’t stay in the limelight.

Like in club play, though, there’s a crucial goal to his credit. That would be in qualifying for Euro 2016, where he came off the bench to thump a winner past Manuel Neuer, clinching at least a play-off spot for the Republic:

Certainly that’s one Irish fans will remember. But there’s one more Southampton goal to discuss, and it’s the one that will grant him footballing immortality. That’s right, we said immortality, and we meant immortality. You can’t have forgotten, can you?

Ten months ago he scored the fastest goal in Premier League history, at 7.69 seconds, an astonishing 2.13 seconds quicker than the previous record, held by Ledley King. Britain will be submerged before it’s broken. But isn’t that just typical? Although the goal was very well created and taken, it’s a record that’s more about the situation than the excellence of the player himself.

So it’s time to put him in large-font headlines. It’s 2020 and he’s almost the oldest regular striker in the league. He’s always had pace, and is still outrunning defenders for loose balls. He gives his usual 100%, and goes up for aerials like he always has. He’s notched a goal and two assists in this recent run. He scored the fastest goal in Premier League history, people! He’s Shane F***ing Long!

But I’m probably the only one who’ll say so. His contract is up at the end of this season, and an extension is unlikely. Still, I’m looking now at Southampton’s schedule, and here are the next six opponents: Aston Villa (H), West Ham (A), Newcastle (H), Norwich (A), Arsenal (H), Watford (A). This would be just the spot for one last purple patch. I’m hoping for two goals, maybe even three. And I promise to remember them for a long Long time.