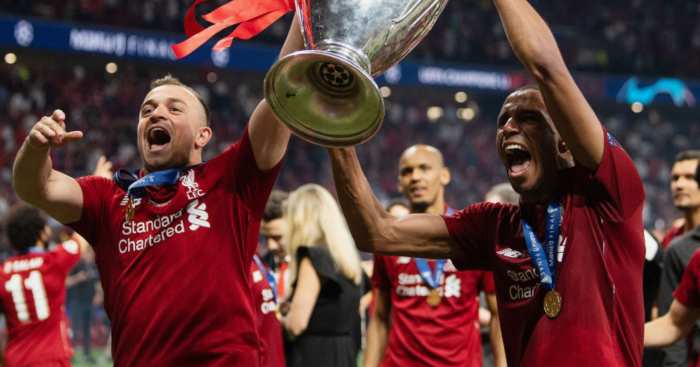 Xherdan Shaqiri expects to be at Liverpool next season to try and help the club win the Premier League amid speculation over his future.

The Swiss international started off the season well and he has scored six goals and assisted two in just 11 Premier League starts this term.

However, he struggled to find a place in Jurgen Klopp’s side over the last few months with an embarrassing ‘pubic’ injury holding him back.

He did start in Liverpool’s unbelievable Champions League comeback against Barcelona earlier this month – but a recent report in Goal claimed Shaqiri could be on his way out this summer.

Despite that, Shaqiri has made it clear that he wants to stay and help bring more success to Anfield after Liverpool’s Champions League triumph.

“Is this why I came to Liverpool? Yes,” Shaqiri said.

“This club needs to win titles, and it’s a good start to win this one, no? Now next year we are going to go again and try to win the Premier League.

“That’s my big dream, to win the Premier League with this club.

“It just feels amazing. It’s been a long time since Liverpool won this title, 2005.

“It’s amazing to give the fans what they deserve.

“This club deserves everything, the staff, everyone involved. I think we’re going to have a big, big party!

“Of course if we didn’t win it, we’d have been very disappointed.

“We played such a good season, and we deserved to win at least one trophy.

“Now we won the biggest title in Europe, it’s amazing. It doesn’t happen every day.

“We are a very good team and we work hard together every day. I hope we can go on, this is just the start and we can win many more titles.”